Plenty of strawberries left to ship from California

Overview of the California strawberry supply, complemented by charts from Agronometrics. 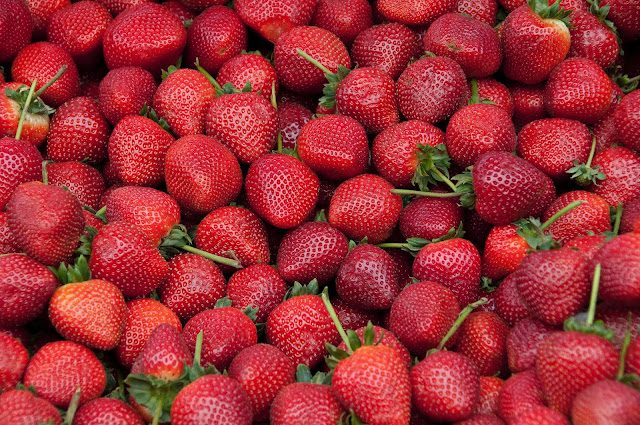 Original published in ThePacker.com on September 8, 2021

Strawberries typically aren’t thought of as “fall fruit,” but plenty of promotable volume will be available in the months ahead.

Nearly a quarter of total California fresh strawberry shipments in 2020 were shipped from September through December, according to U.S. Department of Agriculture figures.

As of Aug. 8, fresh strawberry shipments from California so far this year totaled 137.7 million crates, down from 145.4 million crates the same time last year but similar to 137.1 million trays two years ago. At the same time a year ago, about 31% of the of 210-million-crate 2020 crop remained to be shipped.

The hot weather in the West has not really affected strawberry production as much it may have had an effect on other crops, said Jim Grabowski, director of marketing for Well-Pict, Watsonville, Calif. “Other than a short hot spell in May, the weather in our strawberry growing regions had been good,” he said. “Right now, the fields in Watsonville are producing a steady crop of good color, size and tasting strawberries that will continue from now through September and into the later parts of October.” 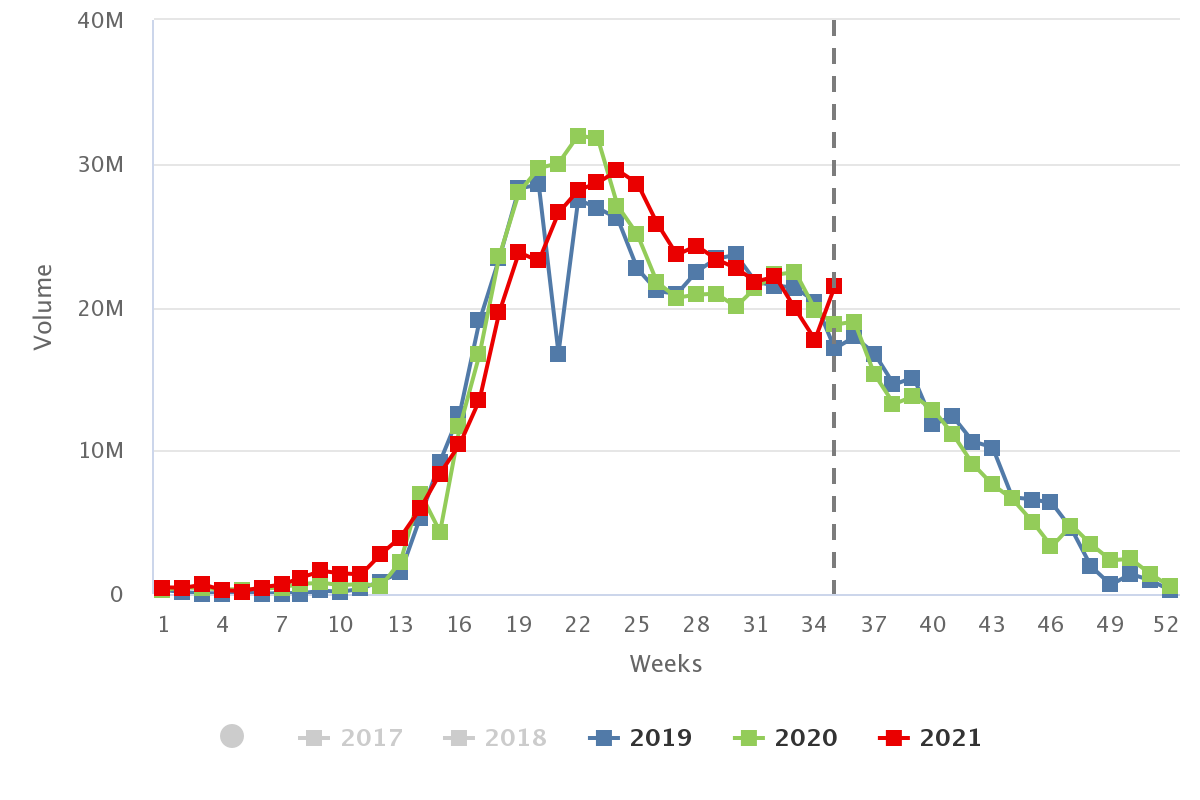 That crop will then be supplemented by Well-Pict’s summer-planted crop in Oxnard, Grabowski said. 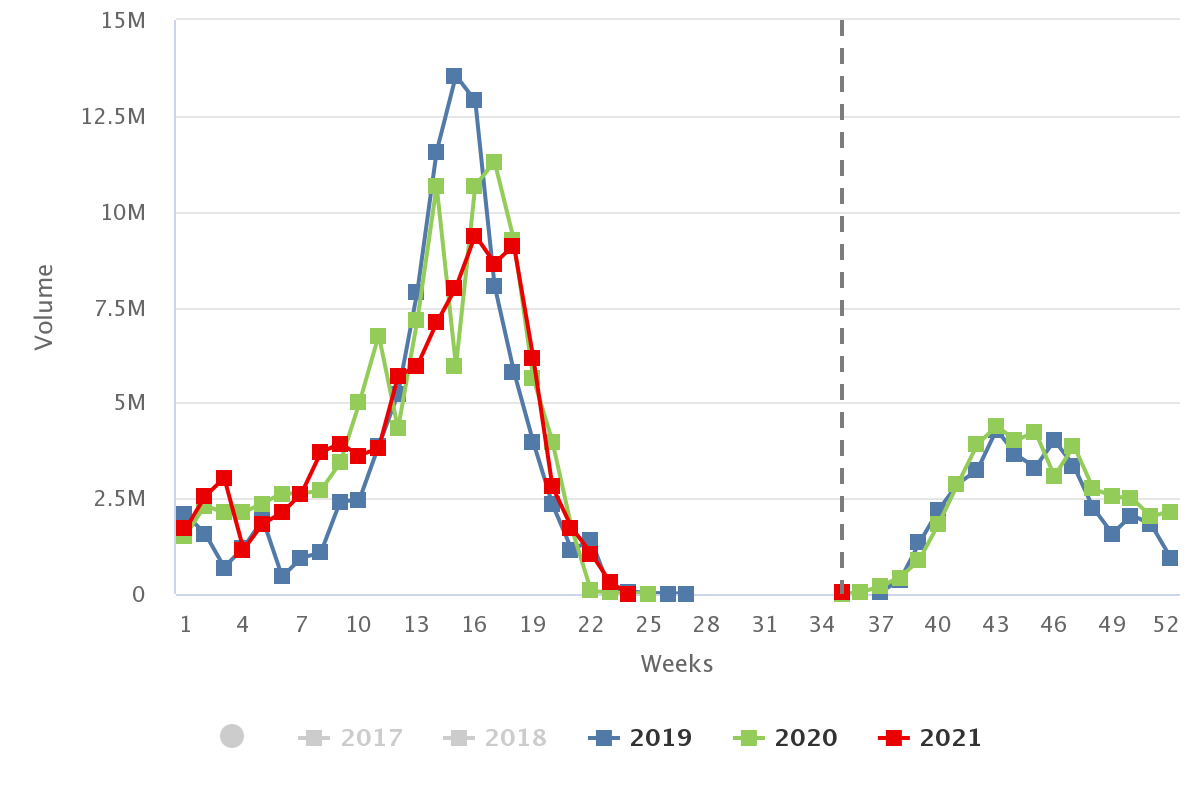 Growers have enjoyed strong quality and steady supply of fruit this year, he said.

“We seemed to have avoided the periods of high volume, over production and low prices this year, and instead have had a nice steady production cycle with prices that both the grower, retailer and consumer could live with,” Grabowski said.


Price (in USD) of strawberries in the US Market 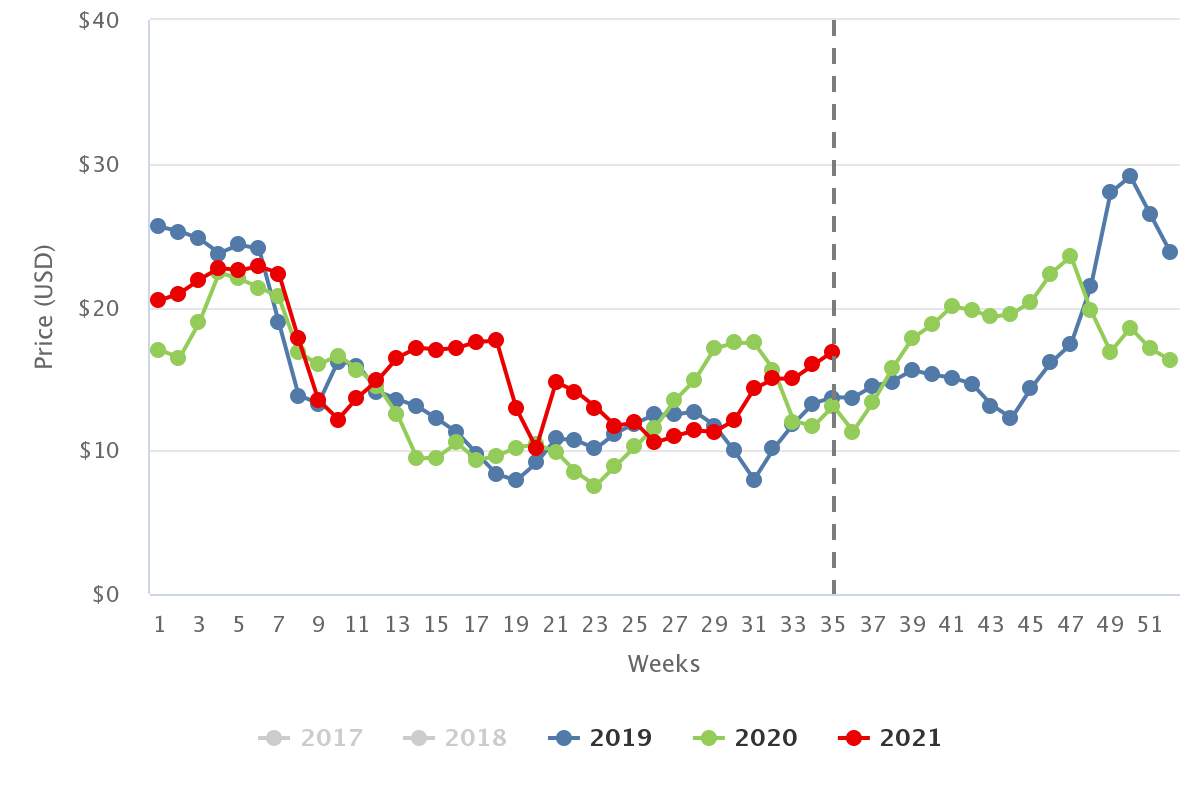 Retail sales of fresh strawberries for the 52 weeks ending July 7 were $3.44 billion, up a whopping 13.1% compared with the previous year, according to statistics from IRI/Fresh Look.

Strawberries represented 4.9% of total produce department sales for the 52-week period, according to data from IRI/Fresh Look published by the California Strawberry Commission. Total berry sales were $7.68 billion for the 52 weeks ending July 11, up 12.1% from the same period the previous year.

Projected weekly volume in the fall period of summer-planted strawberries, grown in Santa Maria and Oxnard, is expected to be up about 5% compared with 2020, said Jessica Lara, marketing specialist with the commission. California’s total fresh shipments for the 2021 season will fall somewhere between the 202-million-crate crop in 2019 and 210 million crates packed in 2020, she said.

“We had a little bit of a slow start this season, but everything has been going good,” she said, noting recent consistent production in the Salinas-Watsonville region.

Growers in that district will harvest through the fall, slowing down in September and October. At that point, shipments will increase from Santa Maria and Oxnard.

Lara said retailers continue to show strong interest in promoting strawberries, with many stressing the health benefits of the fruit during the pandemic.

Other marketing activities by the commission this year have included sharing stories of growers and farmworkers on social media and giving virtual farm tours, she said.