Overview of the Washington apple season, complemented by charts from Agronometrics. 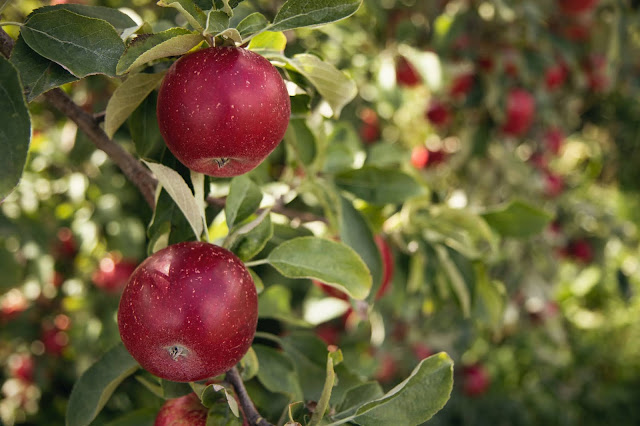 Original published in ThePacker.com on August 05, 2021

An unprecedented run of triple-digit heat has stressed and diminished Northwest tree fruit crops, but the full extent of damage is not yet known.

In June, some industry leaders were estimating an apple crop size of about 122 million cartons, down from 134 million cartons for the 2020 crop. The U.S. Department of Agriculture will release the agency’s first apple crop estimate on Aug. 12, and the U.S. Apple Association will release its industry-generated estimate on Aug. 20 at the group’s Outlook Conference in Chicago.


Volumes (in Kg) of apples from Washington in the US Market 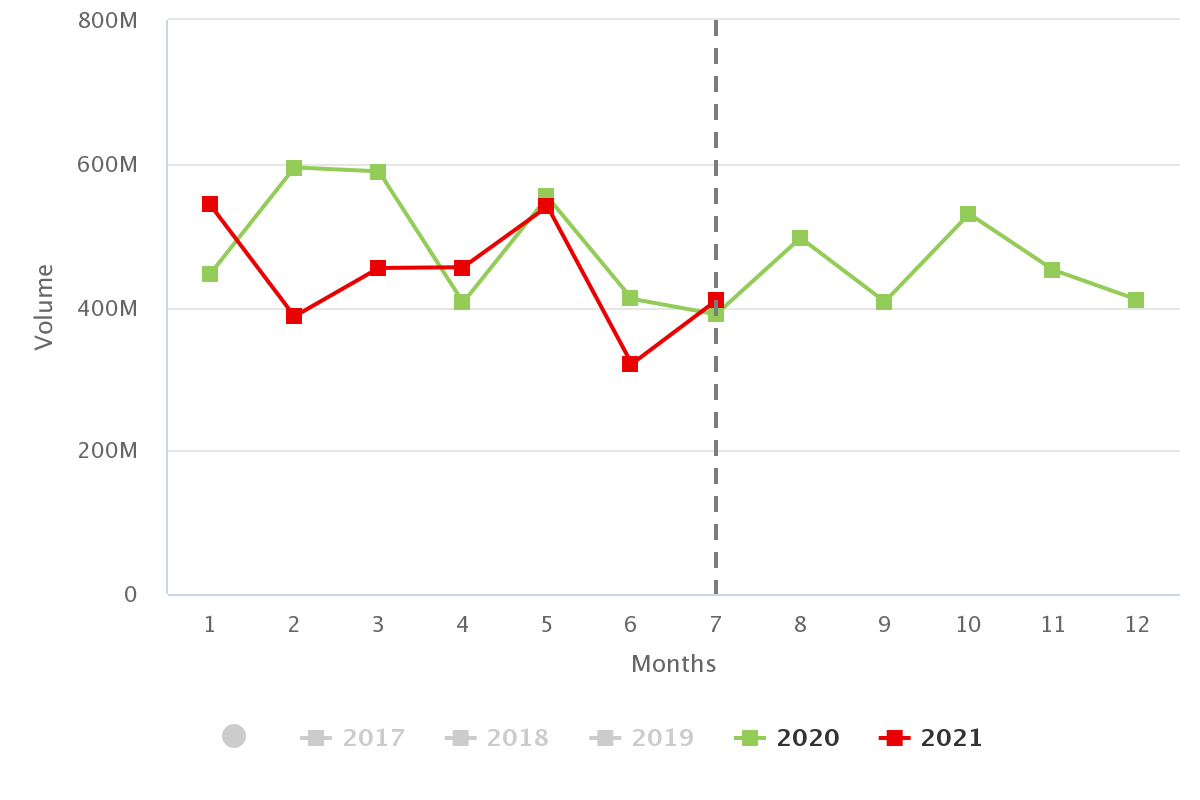 Market conditions were active for 2020 crop Washington apples in early August, with the USDA reporting prices of $28-36 on 72 count gala cartons, up from $24-30 the same time a year ago.


Price (in USD) of apples from Washington in the US Market 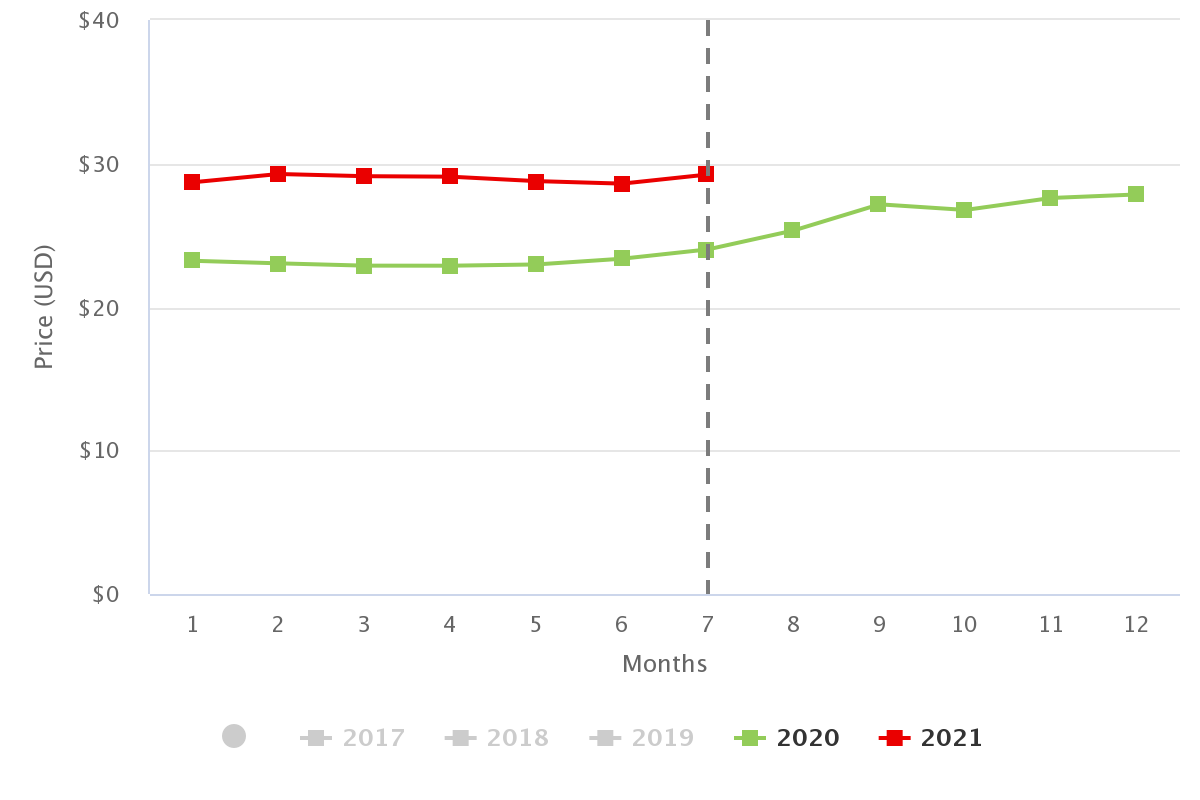 Lee Kalcsits, associate professor of fruit physiology with Washington State University and extension researcher at the WSU Tree Fruit Research and Extension Center, said the Wenatchee region experienced a 105-degree day on July 30, but the forecast called for temperatures to shift to the mid-80s in early August.

Those forecast highs in the mid-80s would be the coolest since mid-June when the heat dome first established itself over the region, he said.

The central Washington apple-growing region has experienced 16 days over 100 degrees Fahrenheit this year, he said.

Coming into this year, Kalcsits said the all-time temperature record for Wenatchee was 109 degrees.

“This year, we had three or four days above 109 and (one day) we reached 115 degrees,” he said. “So, it is really in a temperature range that the tree fruit industry has not experienced before.”

With bigger and more vigorous trees, pears may be less affected by the heat, he said.

“In general, (pears) are less exposed than, say, a high-density apple tree.”

What the record heat means for 2021 Northwest tree fruit production is not yet known – some think damage could knock the apple crop down 10% to 15% – but Kalcsits said a chief concern is for apples that have been exposed to the sun.

“I’ve seen damage (to fruit) on large trees and small trees,” he said.

Fruit sunburn can occur after 30-45 minutes of high temperature exposure, he said.

There are four main factors that drive up the fruit surface temperature relative to air, he said. Air temperature sets the baseline, with radiation, wind speed and humidity also contributing factors.

“When it was 115, when we had no wind and pure sunlight, the fruit surface temperatures were reaching up to 140 to 150 degrees Fahrenheit if they were unprotected; that’s essentially cooking the fruit.”

Apples heated to that level were probably lost; apples can only recover from surface temperatures around 120 degrees.

High temperatures can cause photo-oxidative damage to the fruit, resulting in browning or bleaching on the fruit surface. In extreme cases, fruit can suffer necrosis, or blackening of the fruit surface extending down into the flesh.

“If the temperatures get really, really hot like they have, we’ve seen a lot of necrosis, then there’s also the risk of internal disorder,” he said. “Outside, things might be OK, but internally, if the temperatures get too warm, it creates all sorts of problems.” Internal browning or hollow spots can be symptoms of excessive heat, he said.

To fight the effect of the heat and blazing sun growers have “stacked” approaches, Kalcsits said. If growers are using overhead shade netting, he said they’re also using some sort of protectant spray or using evaporative cooling or misting underneath nets. Protectant sprays help the fruit reflect light or protect it from ultraviolet light.

Overhead nets in most years can reduce sunburn by 90%, but this year relying on netting alone was a struggle, he said. In addition, Kalcsits estimated only about 5% of Washington apple acreage is under shade nets.

“If (growers) are just cooling and they don’t have nets, then they’re trying to add on a spray protectant that might help,” he said. “They are trying to do anything they can to reduce the risk of sunburn.”

While heat can cause appearance and internal damage, another effect is sizing.

“The fruit size this year is pretty small,” he said. “We’re going into the start of gala harvest and the fruit size isn’t what it has been the last couple of years when we’ve had some cooler conditions.”

With warmer nights, apples typically don’t color up as well, he said.

With all those factors still at work, Kalcsits said it is too early to put a number on potential crop damage.

The excessive heat touched all varieties.

“There are some varieties like Honeycrisp that are more susceptible, but when you get to the temperatures that we reached this summer, everything is susceptible,” he said.

The likelihood of another year like this one is unknown, he said.

“It is difficult to link a single weather event to climate change as a whole,” he said. “It’s more the probability of these events happening has increased.

“This might be a one in-one-thousand-year event or something like that, but the probability of it happening again increases with climate change.”