Overview of the Peruvian blueberry supply, complemented by charts from Agronometrics. 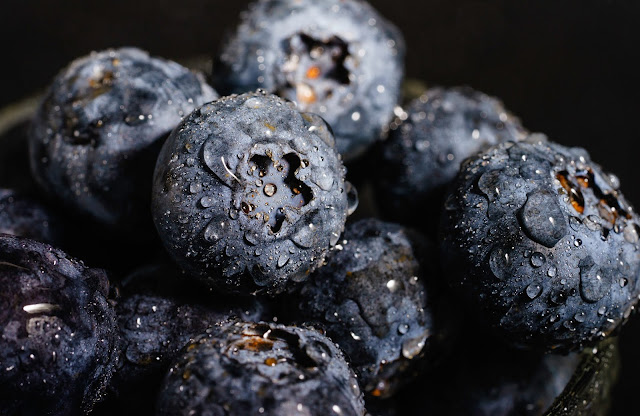 Original published in FreshPlaza.com on August 17, 2021

Peru has seen an early start to its blueberry season this year.

“Peru started the middle of July. It’s very early by three weeks,” says Kaz Bhatti of Gold Coast Produce in Chicago, IL. He says Gold Coast works with a larger grower there who is in full production, though the smaller growers Gold Coast also works with won’t be going until week 38. Overall the season should run into January.

Also on offshore production, Argentina will start shipping at the end of September and Chile will begin its production in December. “I see a good strong offshore season,” says Bhatti. “I’ve heard Chile is a bit behind. Usually they start the first week in December but I’ve heard it may be closer to the end of December and into January.”

Meanwhile, a few regions in Mexico began production last week. “We should start to see some decent volume come on this week, with certain regions going through May.


Volumes (in Kg) of blueberries from Argentina, Chile, Mexico and Peru, in the US Market 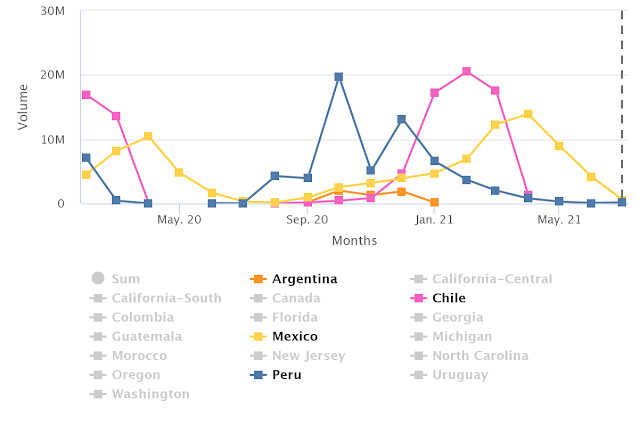 British Colombia is also still producing some fruit. “B.C. has been hit with extreme heat several times in the last few weeks and could finish up sooner than later as the quality of the fruit has been getting worse every week. Some growers may make it through the end of August. But most will be done a lot sooner,” said Bhatti. “The market last week was $12-$14 and this week you can’t find much. But if there is fruit in B.C., pricing on pints has gone up to $18-$22 FOB.”

The domestic season is winding down as well. On the West Coast, Bhatti notes that Oregon and Washington, two regions that have also seen heat waves this summer, are still going. But given the most recent heat wave, he says he’s not sure about how arrivals will be affected. “The market has gone up to $20-$22 pretty much all across the U.S.,” says Bhatti


Prices (USD/Kg) of blueberries in the US Market, by packages 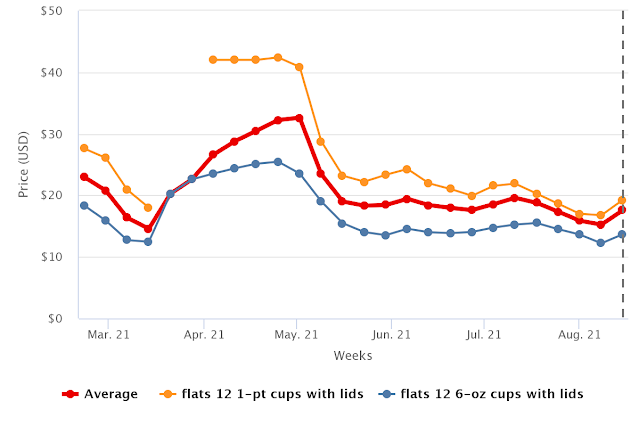 And in the East, New Jersey also still has some fruit available and Michigan is still producing. “Michigan has seen a lot of rain. They should go into September, though that depends on what the recent storms have done to the crops,” he says.

Meeting all of these tighter supplies is stronger demand for blueberries--demand that has increased this week. “It’s steady and strong because the market showed $10-$14 on pints on Wednesday last week. Price has increased significantly since last Thursday and strong demand has sucked up a lot of fruit. The market has adjusted to the $20-$24+ range.”

Looking ahead, pricing will continue to climb. “It’s already increasing. It will keep increasing by $1-2 per week for the next two months through October. I see the FOB market on pints being between $30-$34 by mid-to-late September,” Bhatti says. “And then potentially getting up to $38-$40. Then, by the middle to end of October, pricing should start declining as it has over the last several years , and we should see pricing on pints in the $20-24 FOB range by Thanksgiving.”