Overview of the blueberry supply by Luciano Fiszman of Gourmet Trading Co., complemented by charts from Agronometrics. 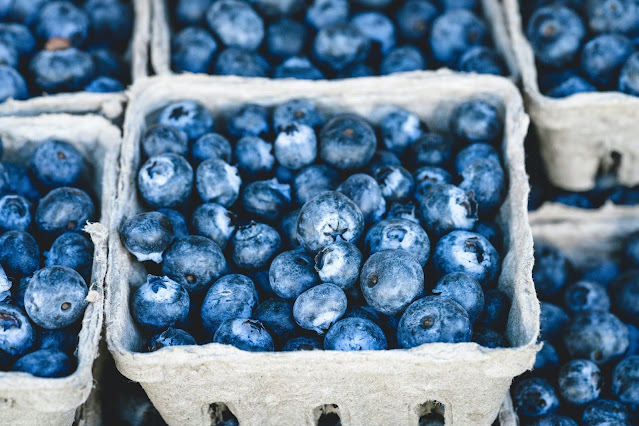 Original published in FreshPlaza.com on May 05, 2021

Domestic supplies of blueberries are coming on heavily to meet a high demand market for the fruit.

The supplies coming on now follow a delayed start for the Southeast blueberry season. “The crops in Georgia and Florida had been delayed roughly 10-15 days, depending on the varieties and location. Two weeks ago they went through some rough weather that created more issues for supplies,” says Luciano Fiszman of Redondo Beach, Ca.-based Gourmet Trading Co. 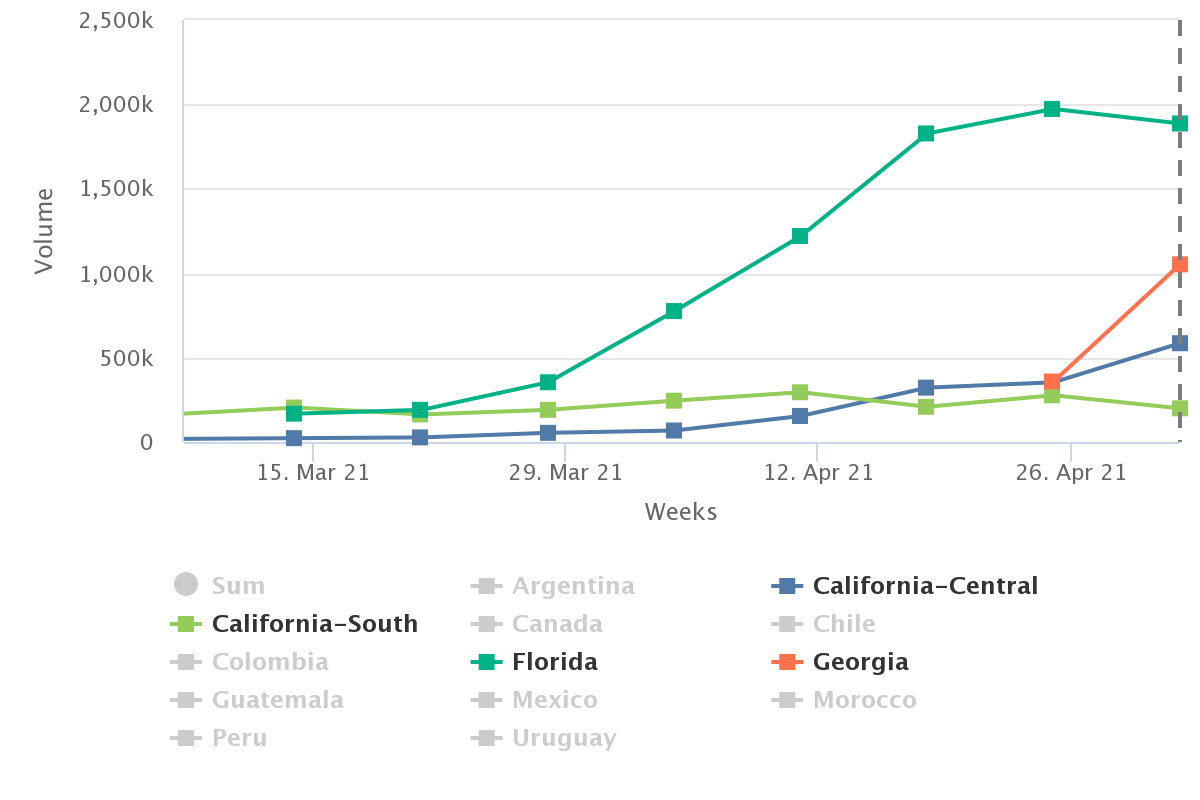 Right now, Central Florida is currently behind on its pick while North Florida is harvesting good supplies. Georgia is also ramping up in volume and will reach its pick in about seven to 10 days. “The good thing is that production is lining up with one location after the other,” says Fiszman.

Mexico still has fruit as well but it has an evergreen production. “The volumes out of Mexico don’t grow or decrease from one week to the next,” he says. “Traditional crops such as Georgia and Florida’s, in two weeks for example you go into the pick and you have three times the fruit. Their picks have much more of an effect on the market than Mexico whose volumes are more stable,” says Fiszman. “Mexico though has been in the driver’s seat for West Coast distribution for the past six weeks and will be for another week or two more.”

In Shafter, CA, Gourmet Blueberry California, a company-held farm saw a slower than anticipated start to the season. However volumes are expected to progress steadily as the month moves on and the crop looks strong in size and quality. “We anticipate a strong jumbo blueberry program, which has always been one of the distinguishing characters of this operation,” says Michelle Carpenter, farm manager. “The warmer temperatures that are expected this week should be the perfect catalyst to start the season. We are looking forward to a great harvest.”

All of this meets a market that has an overall shortage on all berries--strawberries, blackberries and raspberries. “And when you have a shortage on one berry, typically the market goes and buys another one,” says Fiszman.

Improving the delivery of berries

Fiszman also notes that in general, the berry industry’s work to create quality year-round supplies that see no gaps has helped make berries an item consumers shop for weekly. He also notes that overall pack sizes on blueberries are trending larger. “Blueberries used to be packed mostly in smaller containers,” he says. “But because people have been at home, a small package doesn’t make much sense because they’ll eat it quickly. And if the package is bigger, the market might still sell the same amount of packages but if each package has more volume, than you’re moving more volume.”

As for pricing, April prices have been significantly above a normal year. “It was higher than the last few years than we can remember. That was coming from March, which was a really tough month for the business in that transition from the offshore deal to domestic crop,” Fiszman says.


Price (in USD) of blueberries in the US Market 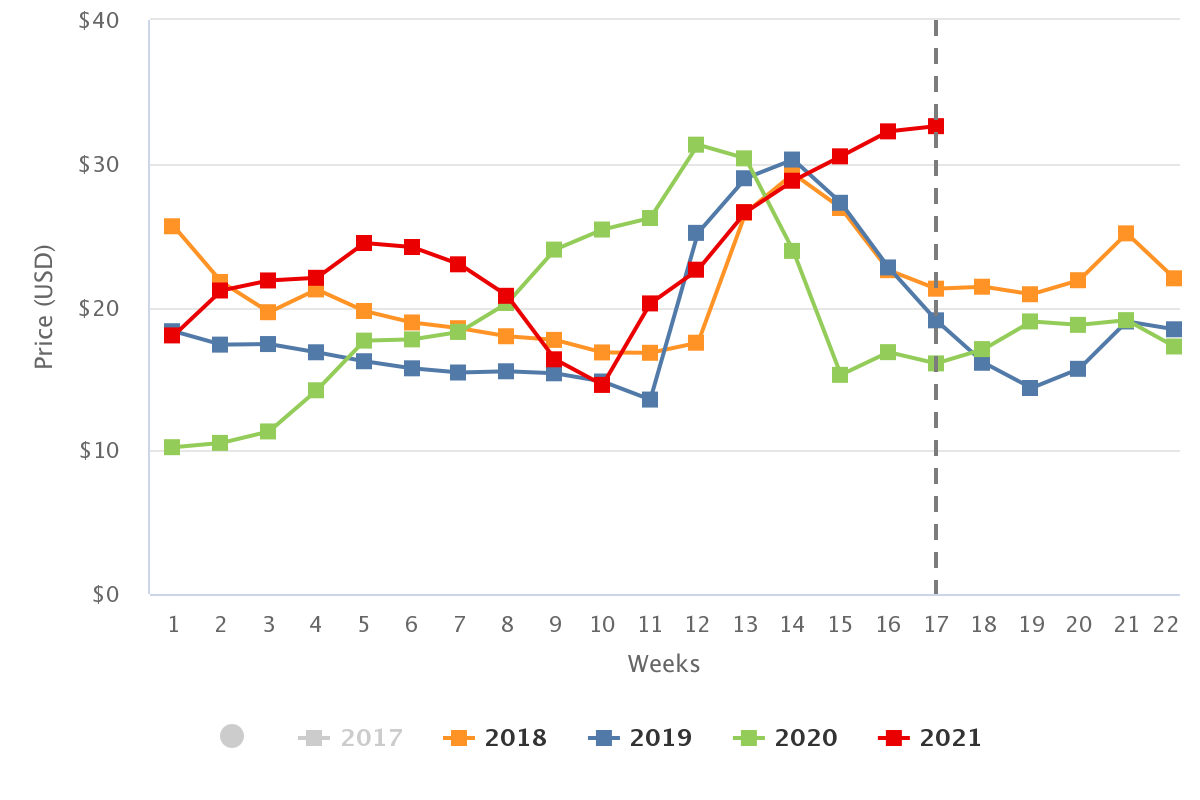 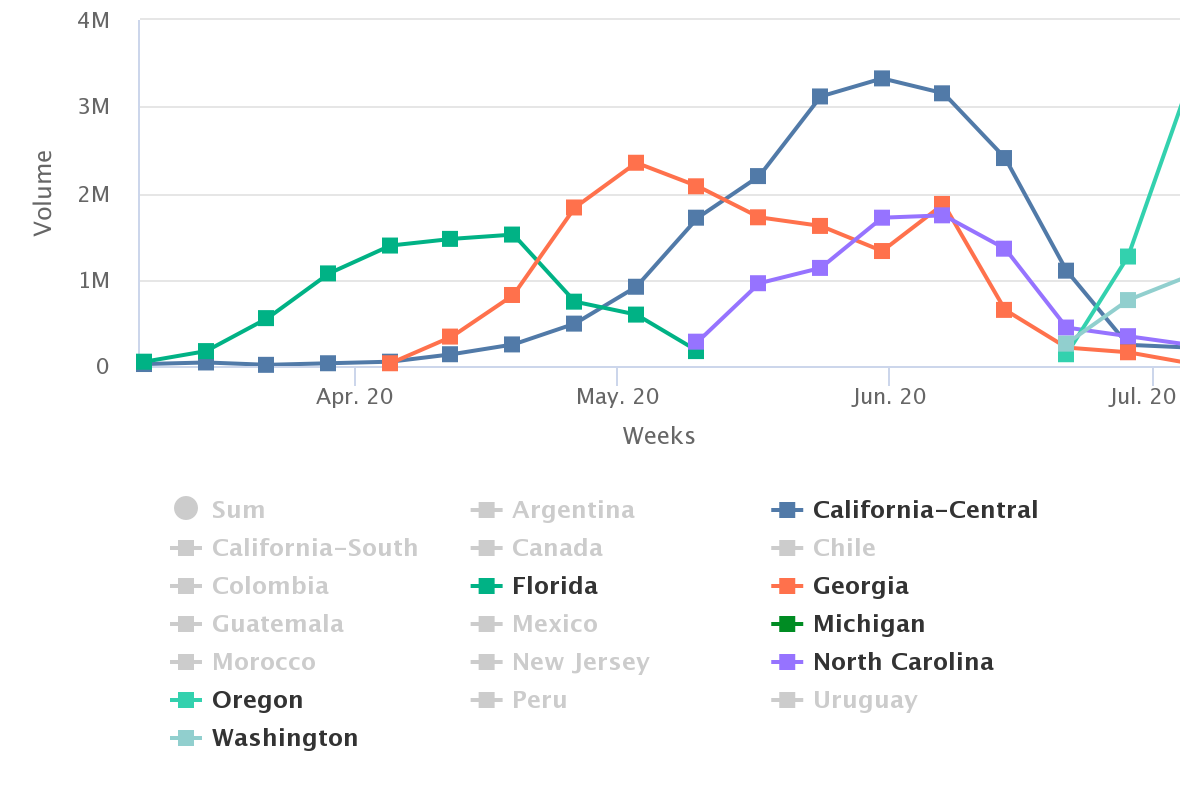