Overview of the grapefruit supplies by Doug Feek of DLF International and Robert Delatorre of Horizon Marketing Inc., complemented by charts from Agronometrics. 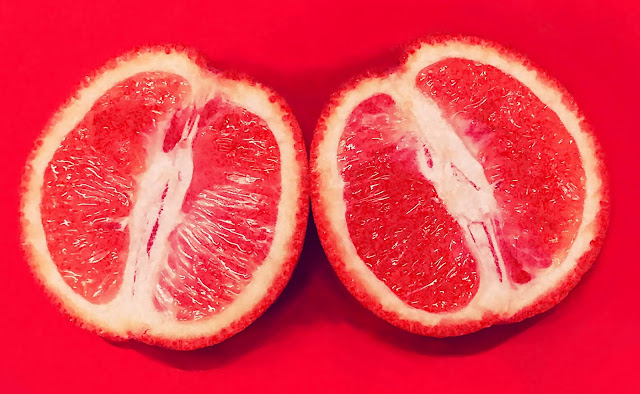 Original published in FreshPlaza.com on March 24, 2021

Grapefruit demand in North America has been strong this season and following the February freeze in Texas, it’s likely going to continue to get stronger.

In Florida, DLF International of Fort Pierce, FL purchased 600 new acres of citrus groves last year, most of which is grapefruit so the company doubled its grapefruit production this season and that production will double again next year. “We have enough grapefruit left at the pace we are going to go into the second week of April with supplies of grapefruit,” says Doug Feek of DLF.


Origins of grapefruits in the US Market 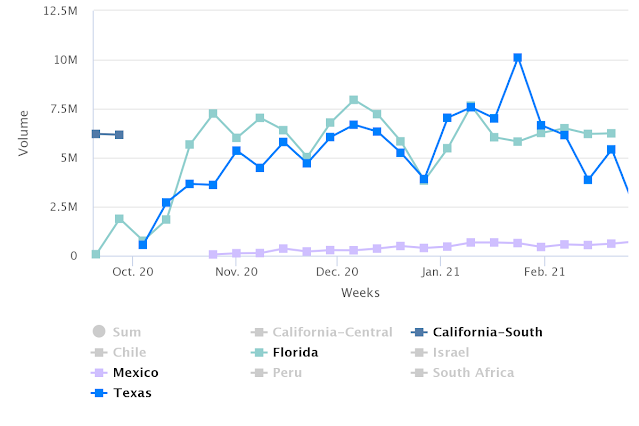 Demand meanwhile for the citrus fruit has been steady and strong. “Demand has increased a little bit since the Texas freeze but we haven’t seen a huge increase,” Feek says. Instead, growers seem to really be waiting on next season to fully see what the effects of that freeze was in Texas--if the state’s trees were damaged from the cold weather, if their bloom doesn’t set, this could all create pressure elsewhere.

“We don’t really know what to look for next season. But we do feel there’ll be higher demand early next season. A lot of retailers switched over earlier to California this year for their grapefruit. So that being the case, we feel like demand in Florida will be early next season as well and we’ll probably run out sooner than usual,” Feek adds.

And while pricing on Florida grapefruit is currently similar to last year’s prices, demand and prices could strengthen as they did last season. But again, all eyes are already on next season. “We’ll see what kind of demand we’ll have on grapefruit next year. It will be based a lot on Texas,” says Feek. “If they’re short next season, there’ll be more demand and hopefully hold higher prices in the U.S. market.”


Prices (in USD) of grapefruits in the US Market 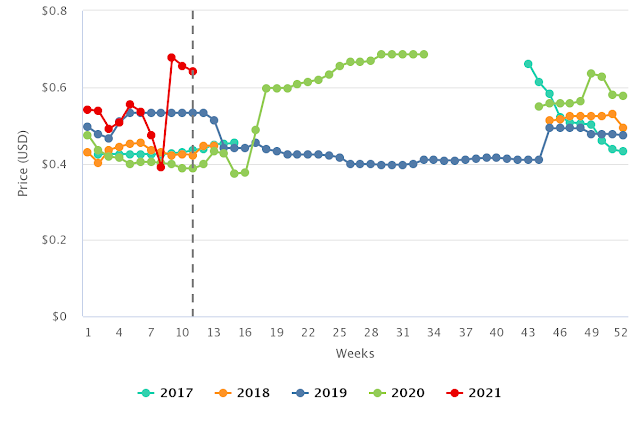 On the West Coast, Robert Delatorre of Horizon Marketing Inc. in Visalia, CA says that supplies of California grapefruit are tightening up. “Texas finishing early has created more demand for grapefruit and so the supplies are getting tight,” he says. “We’re finishing a couple of regions here in the Central Valley and some regions in California are tightening up already.” (California’s District #1 generally sees production into the end of March or early April.) That said, other large shippers sourcing fruit from Southern California just started approximately a month ago and will continue with California fruit into August-September. 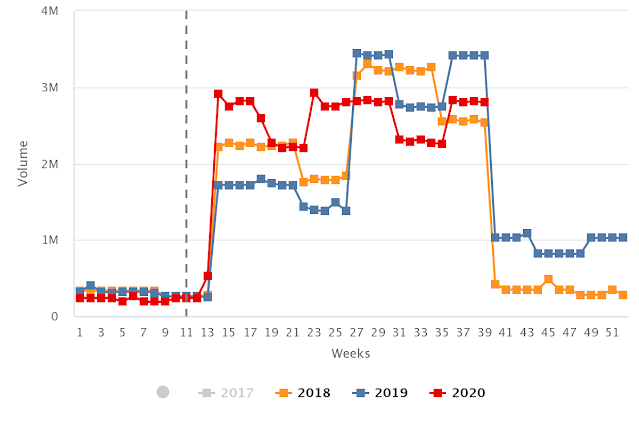 Delatorre also says demand is stronger California grapefruit overall this season and prices are up. “And there are also a lot of factors coming into play right now. Restrictions are easing up and vaccines are starting to be distributed and restaurants and foodservice is starting to open. That’s going to create some demand in all produce, including grapefruit,” he says.

The pressure on California supplies could also create opportunities for Mexico, says Delatorre. “Mexico just finished up shipping from one of their regions but they’ll probably start up again in early to mid-May. They’ll get back in the game pretty quickly,” he adds.