Overview of avocados from California in the U.S. market, complemented by charts from Agronometrics. 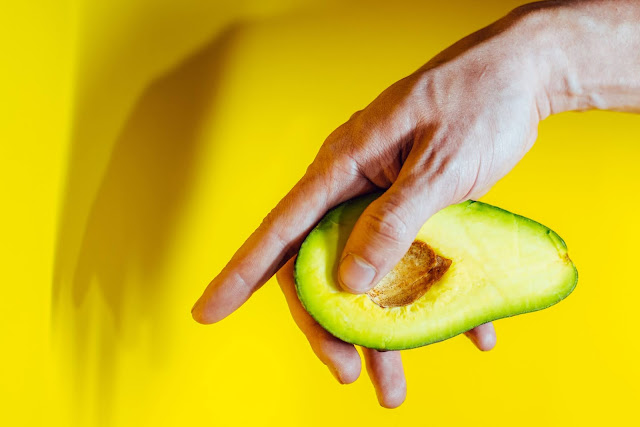 Original published in FreshFruitPortal.com on March 08, 2021

Even with the California Avocado Commission (CAC)’s revised forecast, promotable volumes are still expected and prices are moving upwards.


Reported prices (USD) of conventional avocados  in the US market 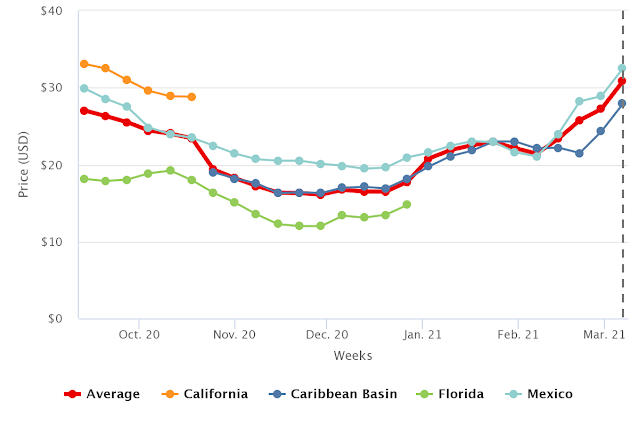 Ken Melban, the vice president of industry affairs for the CAC, said: “California's back again”.

”We expect to see promotable volumes in the spring through the fall,” he said. “And we're seeing good sizing, good quality. We're excited about the start of our season,” he said.


Volumes (in Kg) of avocados from California in the US market 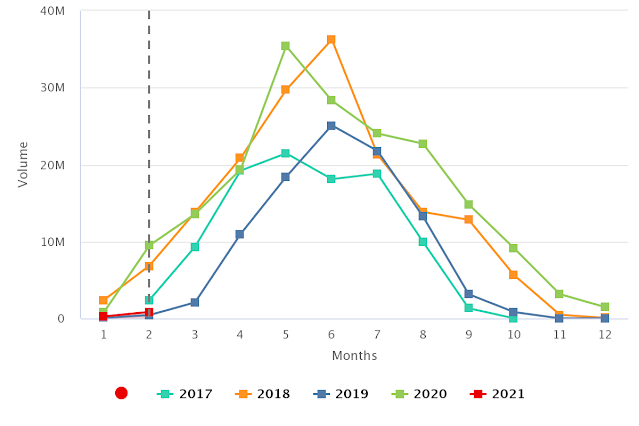 He also added that pricing is seeing an upswing.

“We're starting to see an increase in pricing now which is encouraging. Pricing was rather low, but we're seeing pricing get strength," he said. "And I think it speaks to the excitement and enthusiasm around California avocados. Retailers and customers realize that there's a premium there.”

The adjusted forecast was released after winter weather events including heavy winds in February resulted in damaged trees and fruit drop. According to Carson McDaniel, director of Business Development for McDaniel Fruit Co., the effects were felt differently in various regions.

“The impact of the recent wind event can be seen throughout most of the major California avocado growing regions, but some groves with greater exposure to the elements were hit harder than others,” he said. “We have seen significant fruit drop as well as tree damage in both Riverside & Ventura counties, while San Diego county seems to have been spared for the most part.”

McDaniel also predicts a good 2021 season with an ample harvest. However, the one area he feels ​could be improved upon is rainfall.

According to McDaniel, even with early February’s rainfall, the amount of rain for this year is still far below what would be optimal, which could cause delays to avocado sizing.

Melban also welcomed the idea of additional rainfall, although he was optimistic about the season’s outlook overall.

“We would love to have some more rain,” he said. “We did get some rainfall 3-4 weeks ago. And there was some steady rain so we’re pleased to see that. We could always see some more but overall I think things are looking good.”