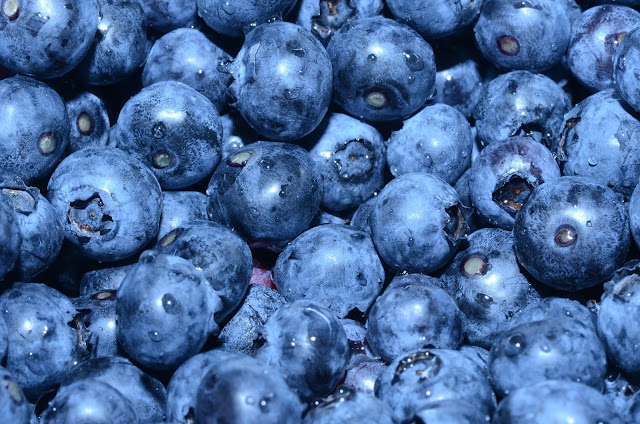 In response to our previous article Agronometrics in Charts: Blueberry Coalition publishes analysis in response to ITC investigation Travis Pope from Capital Trade, Inc. reached out and asked if we would be interested in writing a story based on the study produced by them on behalf of the American Blueberry Growers Alliance. The Alliance is an organization that was formed in response to the USITC section 201 investigation which is in favor US import limitations on blueberries.

As stated in the previous article, Agronometrics is not taking a stance in the investigation. We have clients who are on either side and we look to support every subscriber with the same data and the same level of customer service. This last statement is made all the more evident considering that Capital Trade, Inc. is also a customer of our service.

The Post-Hearing brief was also created to help the alliance's lawyers argue their case before the USITC, so it clearly makes a partisan effort to demonstrate that imports have had an effect on the competitiveness of US producers. Although I also don't necessarily agree with all the findings, there are interesting insights to be gained from the work that Capital Trade has done which I think is worth while bringing to light.

The chart that most stood out to me is below. Where the weekly market share in volume has been set beside the weekly share in revenue. What the report wanted to demonstrate is that the shoulders of production hold a larger economic role than the volumes in that time frame suggests. I think the chart achieves its objective well, but more than that, this visualization offers a simple way to show where producers can get the best returns for their products. This is a methodology that is not only applicable to blueberries, including individual origins as made available by the USDA, but it can easily be replicated in different commodities as well. 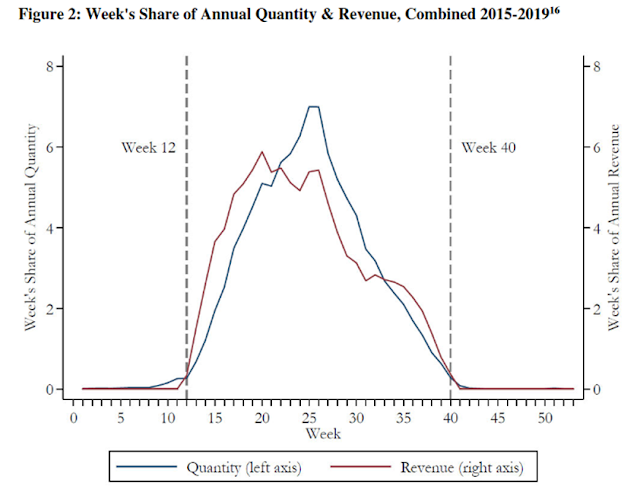 Sources: US and Import Volume are from Agronometrics based on weekly Movement reports from the USDA Agricultural Marketing Service (AMS).

US and Import Prices are from Agronometrics based in weekly Shipping Point reports from AMS, weighted by Movement volume. All prices in dollars per pound.

The calculation is easy enough to do. At the end of the season all you have to do is divide the volumes of any given week by the total volume from the origin that is being studied. The revenues are only slightly more complex to calculate as they require multiplying prices by the volumes that arrived in any given week to calculate an estimate of weekly revenue. To calculate the share of that week's revenue, the value just needs to be divided against the total revenue for the season that is being observed.

To calculate the effects from 2015-2019 the weekly volumes for each week over the years observed can be added, dividing the sums against the total volume of all years together. The exact same calculation can be done for revenue.

As Capital Trade notes in Attachment D the revenue figures are “intended to be a proxy for actual revenue earned by growers but overstates the level of revenues. The Shipping Point data, as its name suggests, does not reflect the same level of trade as farmers’ financial operations. However, the trend in this revenue measure is representative of the trend in growers’ actual revenues.”

I have no idea what will happen to the investigation and whether or not trade restriction will be imposed. The process, however, has brought a new level of scrutiny over the industries comercial data, that can offer value for those who look for it.

The full version of Capital Trade’s report is made available on the ITC’s EDIS system by creating an account. However, we are making a version of the document that was shared with us available here for your reference. The chart I used above can be found on Page 34.