Volume up, prices down on Mexican avocados

Overview of the Mexican avocado supply in the US market, complemented by charts from Agronometrics. 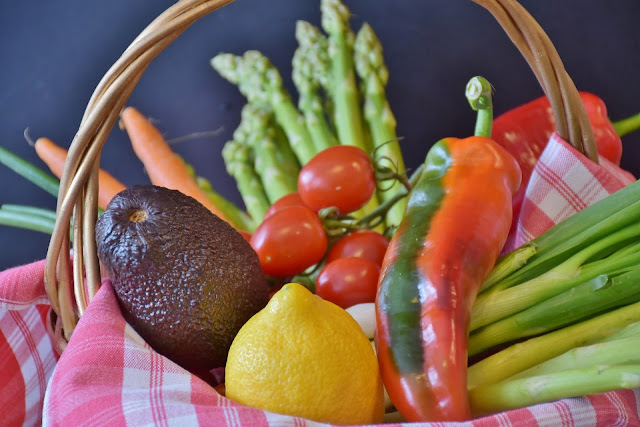 Original published in ThePacker.com on November 12, 2020

Santa Paula, Calif.-based Calavo Growers Inc. will have a large avocado crop from Mexico this season and will be looking for markets in Europe and to the domestic market in Mexico to absorb the bigger crop at a time of “really flat demand in the U.S.,” says Rob Wedin, executive vice president of fresh sales. ( Courtesy Calavo Growers Inc. )

U.S. importers of Mexican avocados expect to see higher volume this year than last, and reasonable prices should make the fruit quite promotable.


Volume (in LB) of avocado from Mexico in the US market 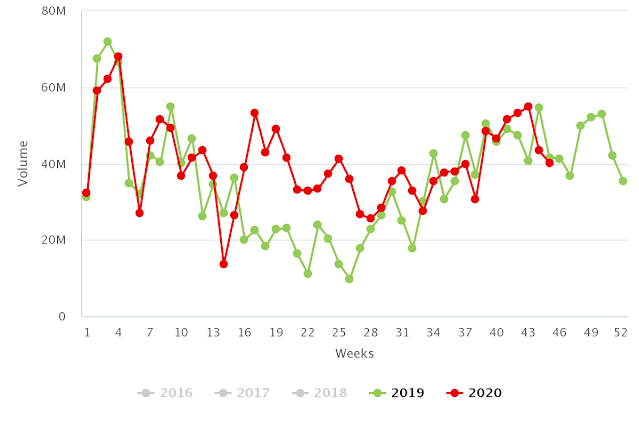 The Mexican Hass Avocados Importers Association estimates that growers in Mexico will export 2.3 billion pound of avocados to the U.S. in 2020-21, up from just over 2 billion pounds during the 2019-20 season.

Vancouver, British Columbia-based The Oppenheimer Group, which announced in October that it had acquired a 65% stake in Eco Farms, has strengthened its year-round supplies of avocados, said Rodrigo Lopez, Oppy’s category director, citrus and avocados.

“We are now focused on Mexico, which is ramping up production as they get in the thick of their 2020-21 season,” he said.

“On the contrary, good rainfall in the summer has helped fruit size and the overall health of the trees.”

The Mexican avocado deal has been characterized by price spikes and uncertainty in terms of volume over the past couple of years, said Donny Lucy, vice president of procurement and East Coast sales for Del Rey Avocado Co. Inc., Fallbrook, Calif.

“This year has been a very steady market,” he said, though prices have been lower than most growers would like.”


Price (in USD) of avocados from Mexico in the US market
  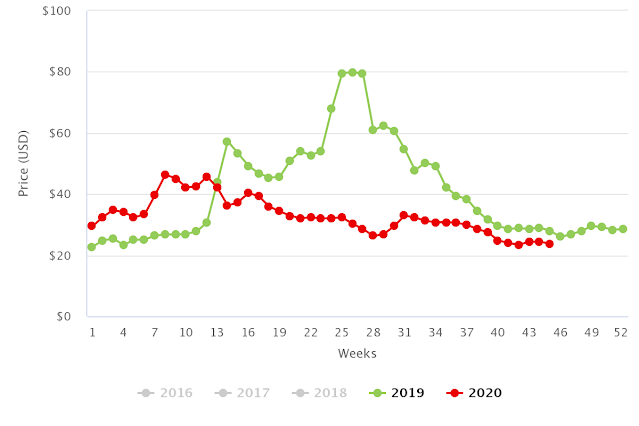 “The volume has been making promotions very, very attainable, especially in the fall and winter months,” he said.

Santa Paula, Calif.-based Calavo Growers Inc. will have about 20% more product from Mexico to sell from this year’s regular crop out of Mexico than last year’s, said Rob Wedin, executive vice president of fresh sales.

The company will look for markets in Europe and to the domestic market in Mexico to absorb the bigger crop at a time of “really flat demand in the U.S.” due to the coronavirus, he said.

A later start switching from the summer crop to the early regular crop resulted in less fruit scarring.

“The fruit’s been cleaner this year,” Wedin said.

Rankin McDaniel, owner and president of McDaniel Fruit Co., Fallbrook, Calif., was pleased with the early crop from Mexico.

“Even with the pandemic, avocados are moving at a good pace through the system for McDaniel Fruit Co,” he said in late October. “Quality is very good out of Mexico right now.”

Prices were at “promotable levels,” and he said sizes were peaking on mediums — 48s and 60s.


Price (in USD) of avocados in the US market 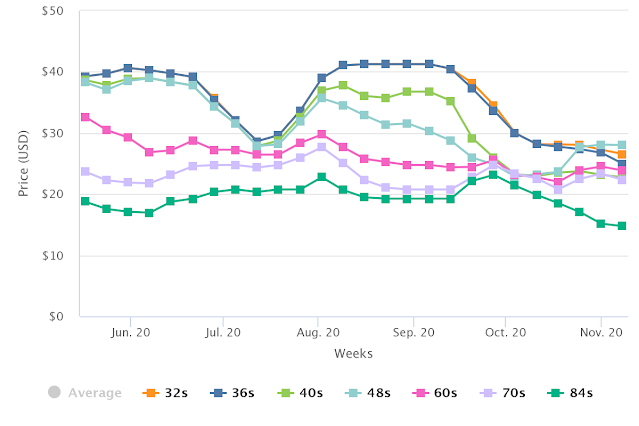 Traditionally, size 60s have been more popular in organics for a more promotable retail price, and 48s have been the more traditional size in conventional, said Nicole Vitello, president of Oke USA Fruit Co./Equal Exchange Produce.

“This year, both sizes are promotable in organic sets,” she said.

There has been more pressure on sales of smaller-sized fruit and No. 2s that traditionally go to foodservice and restaurants, which have been severely affected by COVID-19, she said.

“Smaller fruit is now mainly going into bagged programs for consumer value and COVID-19 concerns about safety at store level so shoppers can grab a bag of avocados versus touching loose product on the display.”

About half the business at Henry Avocado Corp., Escondido, Calif., has been with restaurants and other institutions, which have cut back orders, said president Phil Henry.

“The overriding factor has been closing of so many restaurants,” he said. “This has made it very difficult.”

Overall shipments have been higher than last year because of lower prices and increased sales to retailers, he said, “but they’re nothing like they should have been.”

Quality of avocados from Mexico has been “exceptional” this fall, said Giovanni Cavaletto, vice president of sourcing for Index Fresh Inc., Riverside, Calif.

He expects a crop 15%-20% larger than the average crop of the past five years.

“This is the first significant increase in the crop that we’ve had since 2015,” he said.

“That’s an exciting increase in availability after three years of very limited growth in Mexican avocados.”

That should be good news for retailers.

“This is really an opportunity to bring avocados front and center in the produce section and feel secure that the volumes are going to be there to continue to promote,” Cavaletto said.