Overview of the Peruvian blueberry season, complemented by charts from Agronometrics. 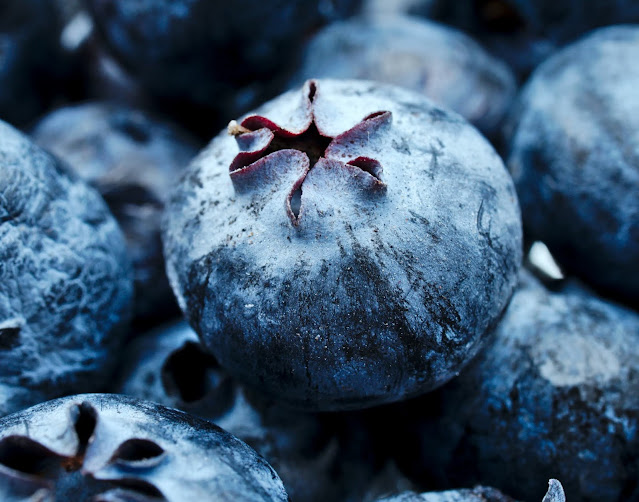 Original published in FreshPlaza.com on October 22, 2020

The Peruvian blueberry season started off a few months ago and the exported volumes suggest that it is already at its peak. The season saw a bit of a staggered start, with some growers starting early, others on time, and some seeing a few weeks delay. Aziz El Sous of Grupo Athos says: “Blueberry exports are concentrated between September and December. For us, we saw a few weeks delay in our harvest towards the end of September and beginning of October because of warm weather. But we’ve caught up now, and the season has been going well.”


Volumes (in LB) of Peruvian blueberry in the US market 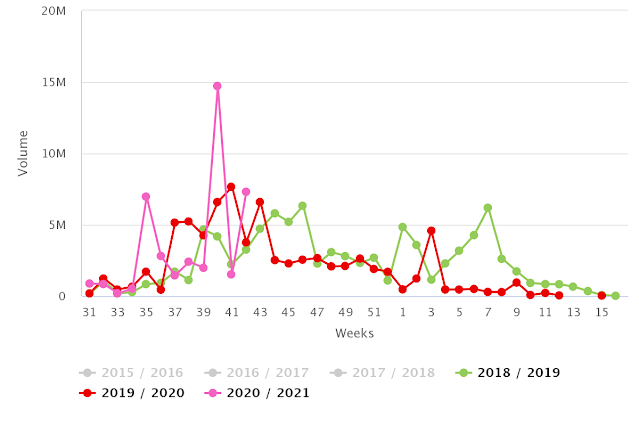 This year, the overall volumes of blueberries out of Peru are seeing a big increase, El Sous says. “The projections say that there will be a 40% increase over last season, with about 160-170 million kilograms total. We’re only in the middle of the season now, so we don’t know yet what the actual volumes will turn out to be, but so far Peru has shipped over 50% more blueberries than they did last year by week 41,” he says. According to El Sous, the increase in volumes is due to both improving yields as well as an increase in the number of planted acreage that could reach 30,000 acres by year-end 2020.

Even though Peru’s production has increased immensely, the demand in the market has been high enough to absorb it all. “So far, there’s been enough demand for the volumes that we are supplying.

There’s been good movement, though pricing isn’t what it was last year. Still, the pricing has been stable and we’re starting to see the market adjust,” El Sous shares.


Prices (in USD) of Blueberries from Peru in the US market 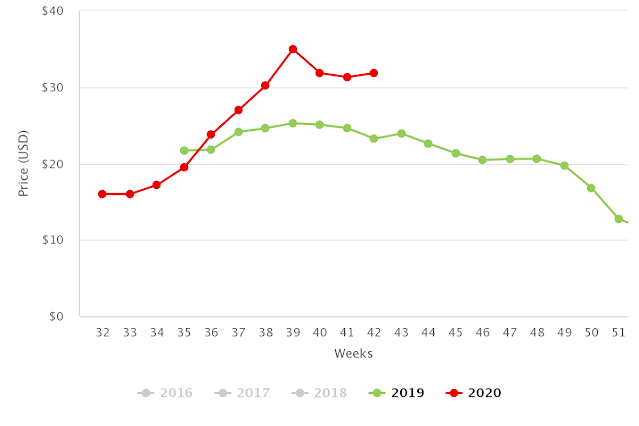 The biggest market for Grupo Athos is Europe, with North America being the second largest, and China being the third. As the volumes are increasing this month, the prices in the market are starting to adjust. “So far, the market has been stable, with good pricing because the volumes weren’t at their peak yet. The pricing is adjusting downward a bit now as we are reaching the peak volumes in weeks 41 and 42, but this is normal due to the volume offered in the market.

Due to the pandemic, overall retail demand for blueberries has increased which has been positive for growers like Grupo Athos, who focus mainly on retail programs. One of the challenges from the pandemic, however, has been the pricing of air freight. “Flying the blueberries has been tough and air freight rates have been really high, almost 40% higher than last year. In addition to this, there are just not that many flights available. Fortunately, the ocean freight has been stable and there are no challenges there. With about 21-day transit to Europe and the USA, shipping the blueberries on ocean carriers has been going well,” El Sous concludes.