Overview of the mango supply, complemented by charts from Agronometrics. 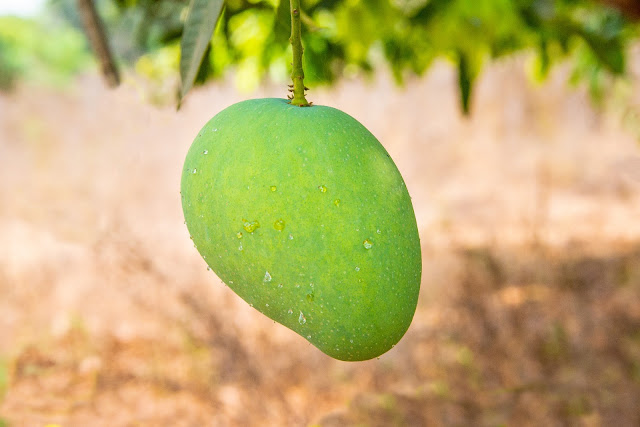 Original published in ThePacker.com on September 10, 2020

As mango shipments from Mexico start to wind down, imports from Brazil already are picking up, and Ecuador and Peru won’t be far behind, importers say.


Volumes (in LB) of Mangoes in the US market 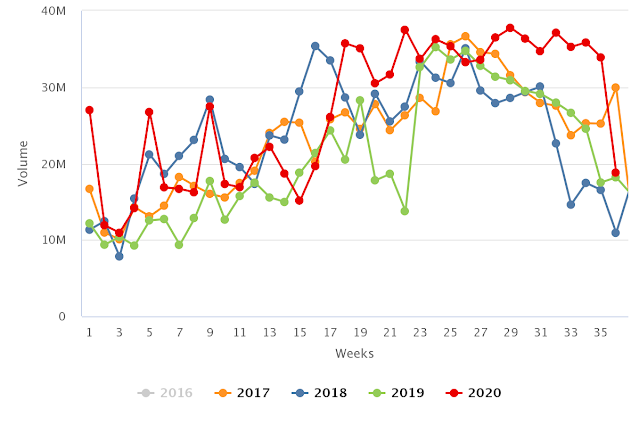 This will be the third year that Ciruli Bros. will offer mangoes year-round.

“It’s the direction the customer want to go,” Ciruli said. “It keeps us busy in the months when Mexico isn’t producing.” 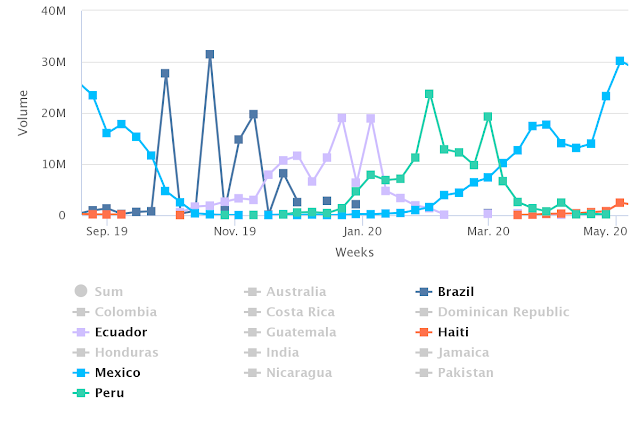 On average, over the past five years, the U.S. received nearly 32 million 4-kilogram (8.8-pound) boxes of mangoes from South America annually, according to the U.S. Department of Agriculture.

South America accounts for about 28% of total U.S. volume.

“South America is a long way away, so the real game for the quality totally depends on transit time,” he said.

“The faster you can get (mangoes) to the U.S., the better quality potential you have.”

Product from Ecuador can reach the U.S. in six or seven days, he said, while the trip from Peru takes 11 days, and the voyage from Brazil can take 14 or 15 days.

U.S. importers aren’t traveling during the pandemic, so Hall said he is taking exporters’ word that quality should be good on this year’s mangoes.

Historical mango sales trends are “out the window” this year thanks to the COVID-19 pandemic, said Ronnie Cohen, partner/principal at Vision Import Group, Hackensack, N.J.

Foodservice sales are down significantly, he said, with restaurants closed or limiting operations and with live events canceled.

Suppliers have had to adjust by focusing their attention on the retail side.

The company received its first fruit of the season from Brazil in late August.

Friedman said he had no indication about the quality of the fruit from Ecuador yet.

Last year, Peruvian shippers had some trouble moving all their product through the system.

“There were more mangoes than there were processing plants to do the hot water treatment,” he said.

Miami-based J&C Tropicals will start its Ecuador program with the nam doc mai variety, a Thai mango that kicks off the season every year, said Luis Cintron, director of sales and procurement.

This year, mangoes should be available from Ecuador the second week of October, he said, a week or two earlier than last year.


Volumes (in LB) of mangoes from Ecuador 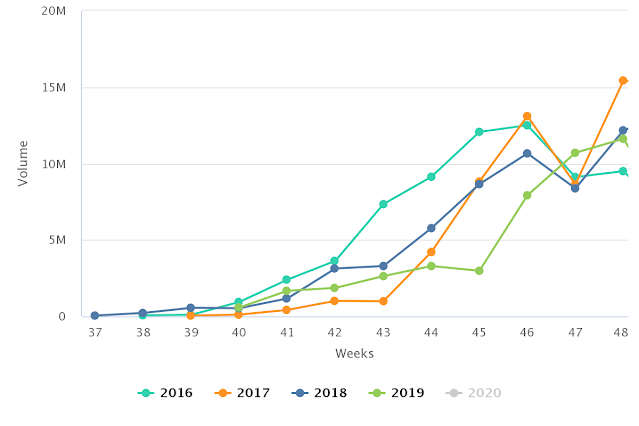 Weather “seems to be working out perfectly,” in Ecuador, Cintron said.

It was too early to forecast availability from Ecuador, he said in late August.

“The fruit is tiny and trees are still flowering,” he said.

Tommy atkins will be the first variety, and the company also will offer palmer and kent mangoes this year.

“It seems as though Brazil is looking at expanding to varieties besides atkins that they focused on for the last 20 years for the U.S. market,” Warren said.

Cool weather in Brazil and Ecuador should help bring on some flavorful mangoes, he added.

As the South American mango season gets underway, the possibility of the new coronavirus impacting the picking and packing operations is in the back of the minds of some importers, Ciruli said.

“I think that will definitely will be a concern,” he said.

All three countries have been hit hard by COVID-19, said Friedman of CarbAmericas.

“Who knows what the dynamic is with COVID and how these plants are going to operate — whether it’s Brazil, Ecuador or Peru,” he said.

July 31, 2020
Overview of the northwest blueberry season by Doug Krahmer of Berries Northwest, Cort Brazelton of Fall Creek Farm and Nursery, Kasey Cronquist of the U.S. Highbush Blueberry Council and Mark Hurst of Hurst's Berry Farm, complemented by charts from Agronometrics. Original published in www.capitalpress.com  on July 30, 2020 ALBANY, Ore. — On a seasonably warm July afternoon in the fertile Willamette Valley, Doug Krahmer stood between rows of organic blueberries and watched as a large mechanical harvester rolled slowly through the field, rattling bushes heavy with ripe fruit. Measuring a little more than 15 feet tall, 11 feet wide and weighing 7 tons, the harvester seemingly floated in the distance over neat rows while fiberglass rods, or “fingers,” shook the berries onto a conveyor belt that swooped them to the upper deck and into plastic crates. From there, the crates were loaded into refrigerated trucks and driven from the farm north of Albany, Ore., to a packing shed ea
6 comments
Read more

October 20, 2020
This week we're going to check out how prices of blueberries, raspberries, strawberries and blackberries have been behaving in the U.S. market compared to previous seasons. Blueberries Let's start with blueberries, which over recent weeks have seen similar prices to 2019, although they have improved somewhat over the last two weeks. Looking at the chart below, we can see that in week 42, the average price of conventional blueberries was US$9.07 per kilo, which is 8% higher than in 2019. Volumes are coming from Mexico and Peru. Prices of non-organic blueberries in the U.S. market (USD per kilo) Source: USDA Market News via Agronometrics . (Agronometrics users can view this chart with live updates here ) Raspberries Raspberries meanwhile have throughout this year experience sharp peaks and valleys, although in recent weeks prices have tended to stabilize. As can be seen in the chart below, in week 42 prices were US$8.39 per kilo, which is 18% up on 2019. The U.S
1 comment
Read more