Overview of the US avocado season, complemented by charts from Agronometrics. 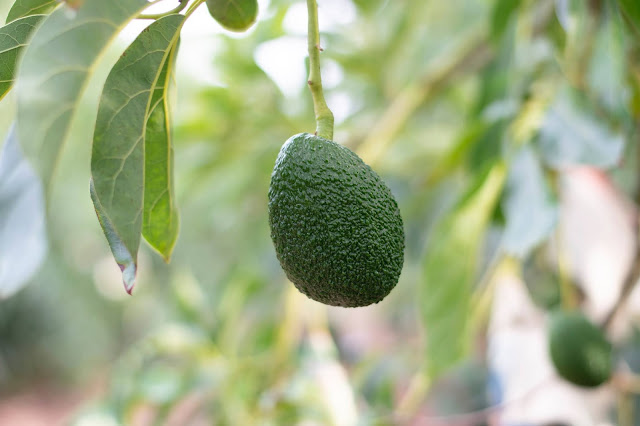 Original published in ThePacker.com on August 13, 2020

There should be plenty of good-quality hass avocados available throughout the fall — and beyond — with an estimated 2.6 billion pounds shipped by growers in California, Mexico, Peru and Chile, according to the Mission Viejo, Calif.-based Hass Avocado Board.


Volumes (in LB) of avocados in the US Market 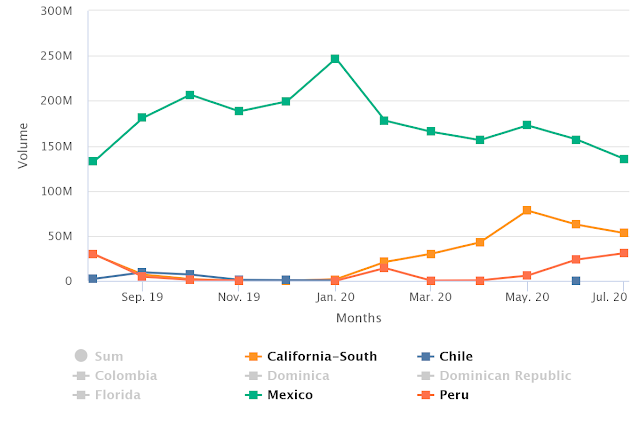 That’s up slightly from about 2.5 billion pounds last season.


Historical volumes (in LB) of avocados in the US Market 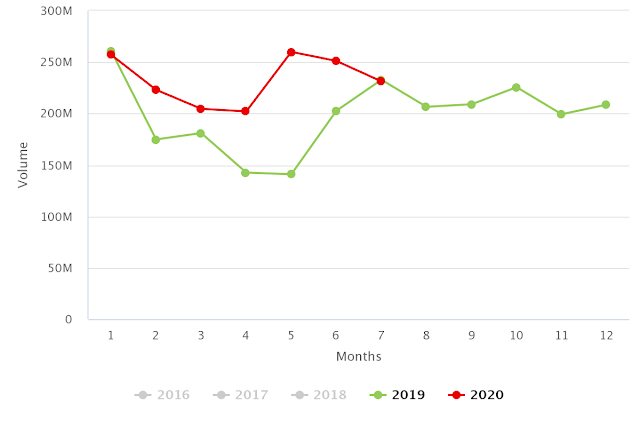 Chile will ship from September until February, and Mexico ships year-round.

Volume was cut in half at the end of March but reached its highest levels ever during April, he said.

Shipments were running about 3.5% ahead of last year by the last week of July, Escobedo said.

“It has been a banner year in terms of volume available this summer, with the three principle countries of origin all filling their niche,” said Chris Henry, vice president of sales and product management for avocados with Del Monte Fresh Produce NA, Coral Gables, Fla.

Retail demand continues to be “incredibly strong” for the category, with growth noted in bagged fruit sales as customers look for fruit that has not been touched by other shoppers, he said.

“Foodservice demand has yet to rebound to pre-COVID-19 numbers, but fast-casual outlets with a developed carryout or digital presence continue to outperform and are seeing increased volume in recent weeks,” he said in late July.

Crane said he expected significant volume out of Mexico in mid- to late September, when growers there start their new crops.

Good volume should continue into winter, he said.

“I think we’re going to need it because we’re seeing how resilient the category can be through COVID,” he said.

Crane did not anticipate large volume of Chilean avocados this fall because of drought conditions in that country.

“It’s been very challenging for them,” he said.

“It’s been very challenging for them,” he said.

Los Angeles-based The Giumarra Cos. also will source avocados from California and Mexico in August with some product possibly coming from Peru and Colombia, said Gary Caloroso, business development director.

Giumarra has experienced a sales lift at retail as consumers look to add healthy, immune-boosting foods to their diets, he said.

“During the beginning of the (COVID-19) crisis, we saw foodservice sales dramatically decrease when many restaurants were closed around the country,” he said.

“Our foodservice sales then stabilized and increased as more restaurants began to operate during this ‘new normal.’”

Calavo Growers Inc., Santa Paula, Calif., will see its California output reduced by 50% in August versus July as the company increases volume out of Mexico, said Rob Wedin, vice president of sales and marketing.

“We’re going to have to make a transition,” he said.

Most of that shift will take place in the West, since other markets already are receiving avocados from Mexico.

But there will be a “very dramatic change in size curve” in the late summer and fall with fewer size 48s and larger and a higher percentage of 60s and smaller, he said.

Smaller fruit can lead to more bagged avocados, he said, which is good for consumers who are making fewer trips to the supermarket and buying more avocados when they do go.

“The heat and humidity that avocados need definitely have come,” she said.

Overall, Southern Florida should harvest 900,000 avocados during its season, which runs from April through March, according to the Homestead-based Florida Avocado Administrative Committee.

That is similar to last year’s volume.