Overview of the upcoming Oregon and Washington pear season by Kevin Moffitt of Pear Bureau Northwest, complemented by charts from Agronometrics. 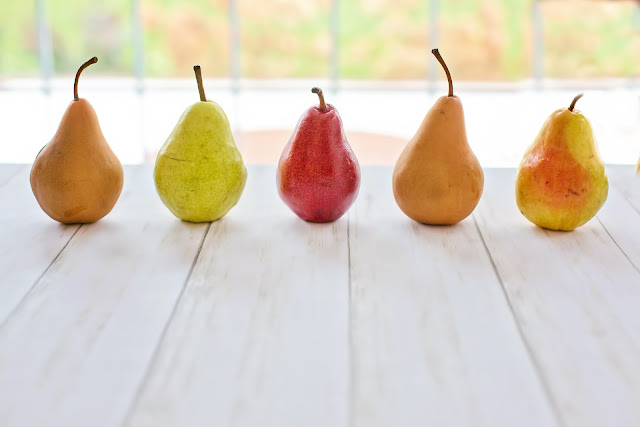 Original published in ThePacker.com on August 21, 2020

The 2020-21 fresh pear crop in Washington and Oregon is projected at 16.6 million 44-pound box equivalents, according the Pear Bureau Northwest’s first official estimate of the season.


Volumes (in LB) of pears from Washington in the US Market 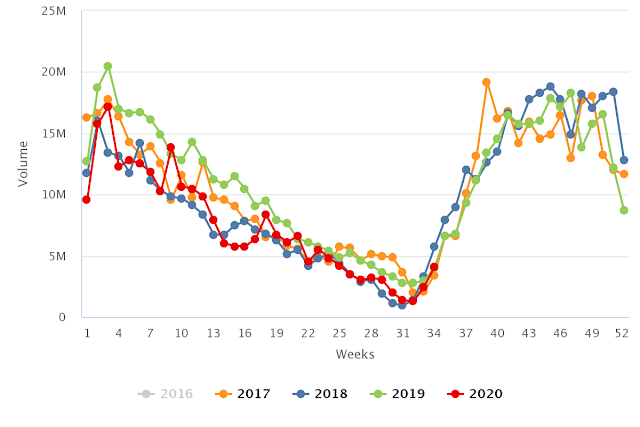 The estimate includes production from Washington’s Wenatchee and Yakima districts, and Oregon’s Mid-Columbia and Medford districts, according to a news release from the pear bureau.


Volumes (in LB) of pears from Oregon in the US Market 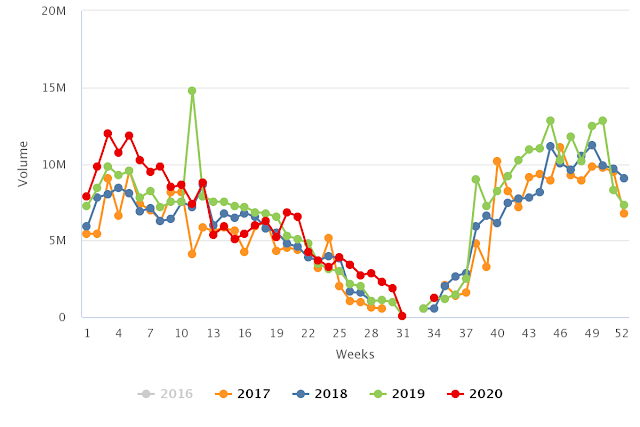 The forecast of 366,000 tons of fresh pears is slightly above last season’s production.

"Growers throughout Washington and Oregon are reporting beautiful fruit and good sizing," Kevin Moffitt, president and CEO of Pear Bureau Northwest, said in the release. "We are expecting a very promotable crop and with imports down by one third and a smaller California crop, the supply chain is open as Northwest pears enter the market.

Harvest for early varieties, including starkrimson and bartletts, has started in all regions of the two states, according to the pear bureau release. Green and red anjous and boscs start in the last half of August.

Specialty varieties, such as comice, seckel, forelle and concorde, are harvest near the end of the month and early September, according to the release.Four leading varieties make up 96% of the Northwest crop, according to the pear bureau’s estimate:

Organic pear production for 2020-21 for Oregon and Washington is forecast at 1.96 million standard 44-pound boxes, according to the release.

“In response to the COVID-19 pandemic and changing shopping habits of consumers, we have shifted more resources to innovative digital programs reaching online shoppers, targeted advertising, influencer campaigns and digital sampling,” Moffitt said in the release. “Pears are a high impulse item for most consumers. With consumers shopping in stores less often and spending less time in the store overall, it is important to grab their attention on the digital platforms.”

The organization plans to continue those methods and others to grab consumers’ attention.

“We have a strong promotion plan in place this season, including an early push for bartlett and starkrimson, omnichannel collaborations with California Walnuts and Cabot Cheese, and more,” he said in the release. “As shoppers continue to prepare nutritious meals at home, we are in a solid position to have an excellent season at retail."