Overview of the raspberries and blackberries market, complemented by charts from Agronometrics.

Original published in ThePacker.com on June 20, 2020

Raspberries and blackberries were the fastest-growing fruit categories in the produce department during the period from 2006-08 to 2016-18, based on average annual per capita consumption, Roland Fumasi, vice president and senior analyst for RaboResearch Food & Agribusiness, Fresno, Calif., said in a presentation to the Pittsboro, N.C.-based North American Raspberry and Blackberry Association in March.


Volumes (in LB) of raspberries in the US market 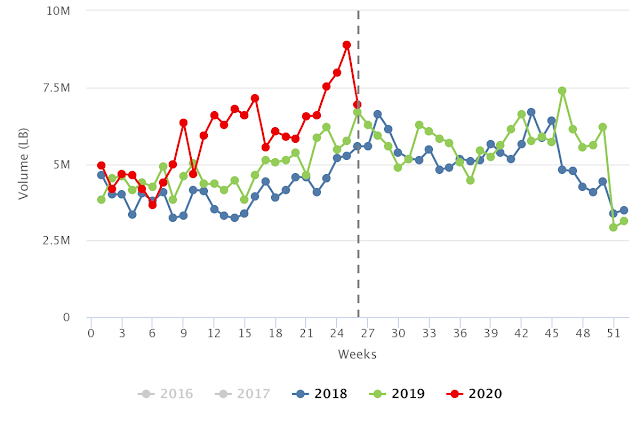 
Volumes (in LB) of blackberries in the US market 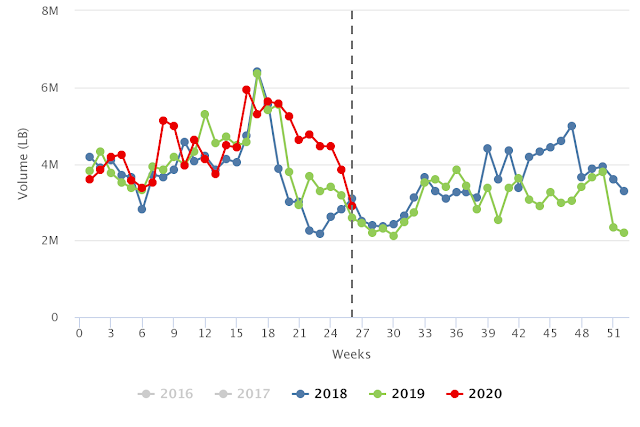 Foodservice sales have been down for raspberries and blackberries, as they have been for most produce items during the coronavirus pandemic, he said.

But retail sales were faring better.

“So far, it appears that the rise in retail grocery sales is largely making up for lost foodservice sales,” Fumasi said.

Most fresh-market raspberries come out of California, said Debby Wechsler, executive secretary of the North American Raspberry and Blackberry Association.


Origins of raspberries in the US market 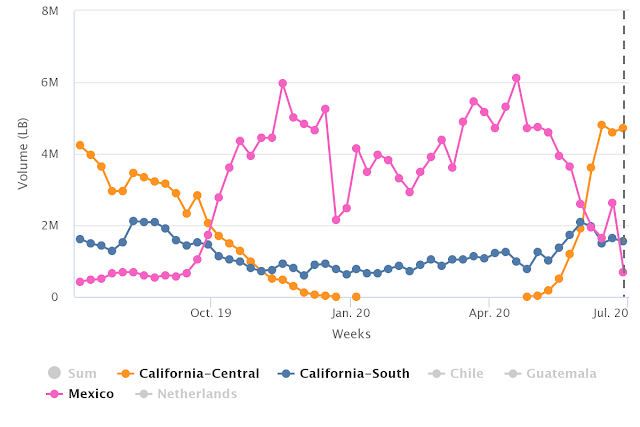 There are some local growers, however, and Wechsler said she would like to see supermarket chains check out product from local suppliers.

“Fresh-pick local raspberries are going to be riper and sweeter than ones that ripened in a clamshell on their way across the country,” she said.

Fresh-market blackberries are grown primarily in California and in the Southeast.


Origins of American blackberries in the US market 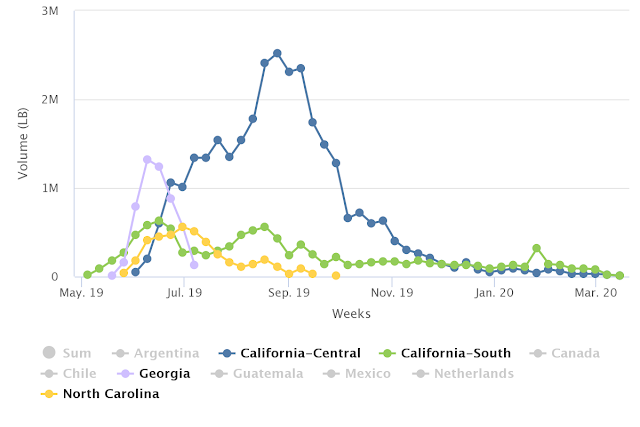 “The Southeast has become quite a production area for blackberries,” she said.

They can be found in several states, including Georgia, North Carolina, Texas and Ohio.

The company is seeing promotional volumes of blackberries and raspberries along with blueberries and strawberries, he said.

“The weather this summer has allowed us to produce fresh, quality, great-tasting berries.”

Naturipe, like other grower-shippers, has implemented COVID-19-related protocols to protect its staff and growers, said Donna Lynn Browne, director of food safety and social responsibility.

“We are taking all the necessary precautions to ensure their safety by providing personal protective equipment and practicing social distancing,” she said.

Raspberries from Watsonville-based California Giant Berry Farms are “looking great” and remain on schedule to increase in volume, peaking toward the end of June, said Kyla Oberman, director of marketing.

The company’s overall volume of raspberries is expected to be similar to last season.

Blackberries from California and Georgia were just starting to harvest in early June, she said.

Because of an increase in acreage, California Giant’s blackberry volume will be up compared to 2019.

“Quality of all California Giant berries has been very good this year, despite the wet weather we saw this spring, which was quickly followed by bursts of very high heat most recently,” Oberman said in early June.

Heaviest volume is expected to continue to October or November.

The 6-ounce clamshell container is the standard pack, but Well-Pict also ships 12- and 18-ounce packs.

This will be the third year that Santa Maria, Calif.-based Main Street Produce Inc. will have a raspberry program, said Paul Allen, sales director.

The company has had a good response to the program, which has grown about 30% year after year, Allen said.

“We’re getting a lot of complements.”

The harvest will continue until November.

The deal will continue into September.

Blackberry sales are trending upward, like blueberries, he said.

“Consumers seem to be buying them heavily at retail.”

The company offers 6- and 12-ounce clamshells of blackberries.