Overview of the Pacific Northwest cherry season, complemented by charts from Agronometrics. 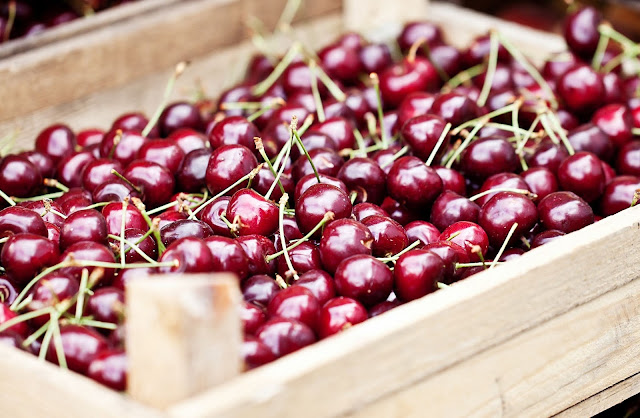 Original published in CapitalPress.com on June 23, 2020

The average freight-on-board price on Northwest red cherries was around $52 per 20-pound box for the week of June 14-21, said Brian Focht, manager of the Northwest Cherry Marketing Association in Wenatchee. That’s $16 more per box than at the same time last year, he said.

It’s common for the season’s first cherries to garner $70 per box or more for the first week of exports to Asia, but prices can be around $20 by July as supply overtakes demand.

Increasing volume the week of June 21-28 will push prices down a little because demand will remain stronger than supply, Focht said.

“Cherries are good and big. Retail is scrambling to get product for the Fourth of July to fill shelves,” Focht said. “If we come out of the Fourth well with retailers wanting more right away, hopefully we can avoid deep discounts.”

He said he would like to see cherries maintain retail prices of more than $2 per pound this season rather than go to $1.75 to $1.80 per pound as has happened the last several years.


Prices (in USD) of cherries from Washington in the US market 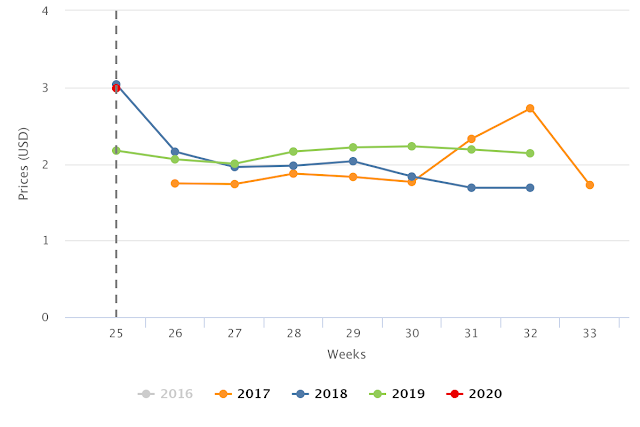 “The way this thing is moving right now, it feels really good,” Focht said. “Pricing should remain strong all season.”

Whether returns are better than last year (which was good) “depends on who you talk to, location, timing and a lot of other variables,” he said.

The industry’s promotional arm, Northwest Cherry Growers in Yakima, forecast a 20.2-million-box crop in May.

Harvest started 11 days earlier than normal on May 28 at Finley south of Pasco. But rain and cool weather slowed crop progression, resulting in “the slowest start to harvest we have seen since 2013, which was the last time we had a rain-shortened crop,” said B.J. Thurlby, president of Northwest Cherry Growers.


Volumes (in LB) of cherries from Washington in the US market 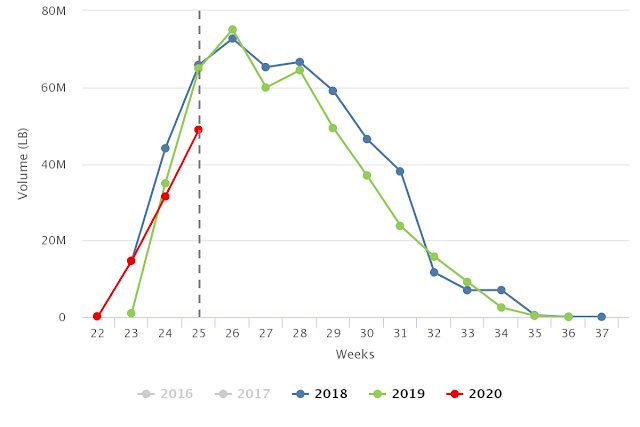 Rain damage to early varieties in the Yakima Valley reduced the crop estimate to 18 million boxes, and Thurlby said it soon may become 17 million. Focht said he guesses it will end up between 16 million and 17 million.

A little over 4 million boxes had been shipped by June 22, and Thurlby expects approximate totals of 6.5 million boxes in June, 9 million in July and 1.5 million in August. Peaks of about 500,000 boxes per day will occur about June 26 or 27 and the week of July 13, he said.

California’s crop, always ahead of the Northwest, was mostly done by June 5 at 6.4 million 18-pound boxes. California’s record is 9.6 million boxes in 2017.


Volumes (in LB) of cherries from California in the US market 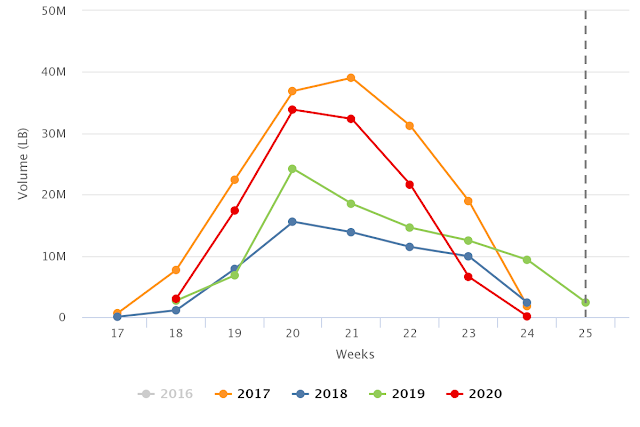 Brenda Thomas, president of Orchard View Farms in The Dalles and Oregon’s largest cherry grower, said multiple rains caused cullage from cracking and softness but that it would have been far worse without cool weather.

Oregon has a more normal size crop than Washington because it had less damage from spring frost and poor pollination, she said.

There’s plenty of good cherries to be harvested through July, and the company is practicing due diligence daily in hand washing, social distancing and face coverings in orchards and the packing house to guard against COVID-19, she said.

COVID-19 apparently has been a bigger problem in Yakima County than elsewhere in Washington.

Charles Lyall, a Grant County grower in Mattawa, said his two cherry checkers stayed home after testing postive for COVID-19, but that the rest of his 170 workers are fine.

He said a March 23 frost and later poor pollination weather led to a smattering of orchards in the Yakima Valley with too little fruit to pick.

The same was true in Wenatchee. Gill Orchard, a small East Wenatchee orchard, didn’t have enough cherries to pick. About three miles away the even smaller Gifford Orchard had a good crop.

“This year has been bizarre in the way one grower will not have enough fruit to pick and another next door might have a normal crop,” Thurlby said.

Lyall said his early Chelans and Tietons were very light and suffered high cullage from wind. Yield was half of normal at 3 tons per acre. His Bings were 6.5 tons per acre, down from a normal of 7 to 8 tons. Wind damage reduced his Rainiers to 25% of normal.

“Lower tonnage and high cullage took the cream out of my early crop,” Lyall said. “Higher prices are great but with cull rates as high as they were on my early stuff, it’s tough to come out of it a winner.”