Sizing and volume of North America stone fruit to increase

Overview of the peaches season by Jon McClarty of HMC Farms, Larry Davidson of North American Produce Buyers, Will McGehee of Genuine Georgia, complemented by charts from Agronometrics. 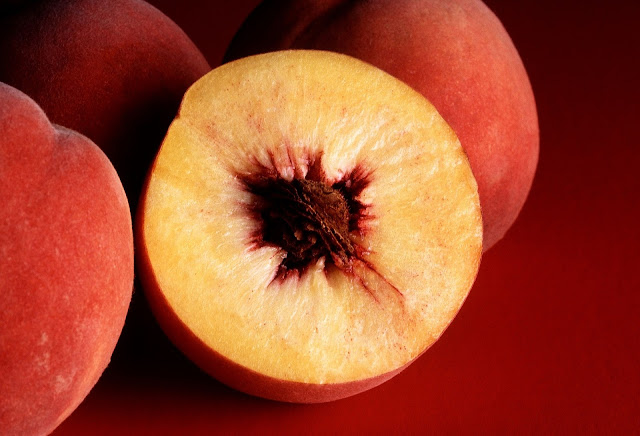 Original published in FreshPlaza.com on June 01, 2020

Stone fruit out of California is building in volume and growers are predicting better sizing to come.

“The fruit quality is really nice. It’s better than I’ve seen in the past few years,” says Jon McClarty of HMC Farms in Kingsburg, Ca. “I’ve been incredibly happy with the quality of the product and that will have some positive impact on demand.”

The season out of California did start slightly later. “The first fruit was early by about a week. After that, it’s slowing down and stretching out a little bit.”


Volumes of peaches from California in the US market 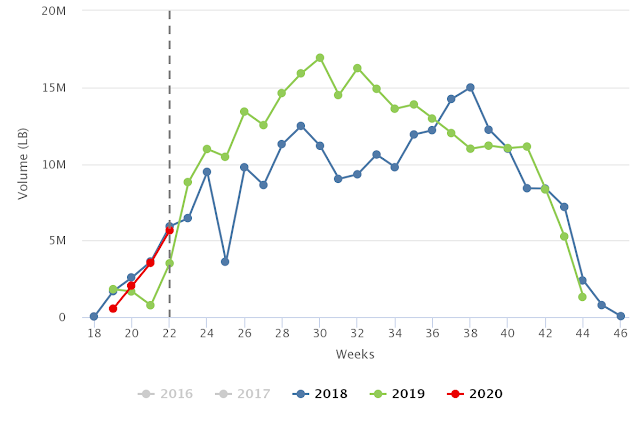 But both McClarty and Larry Davidson of North American Produce Buyers based in Toronto, Canada say that sizing of the early fruit across the industry is smaller due to possibly a shorter time between bloom and harvest. “There’s a lot of smaller fruit floating around the industry. Larger fruit, meaning 40 series, is very hard to come by,” says Davidson, who adds that the crop size is solid though and similar to last year. (Though McClarty estimates that acreage may be slightly down this year due to some isolated hail events.)

Davidson does say that by the beginning of June, fruit should size up better and availability will even out. “It’s been kind of start and stop and patchy across the industry in terms of availability. California had heat and they had cold and now it’s hot again so the extreme variability in the weather is what caused it,” he says.

That’s potentially raising some early demand challenges. “Demand is steady but it’s for the larger sizes. A lot of retailers, whether they be big or small, are very focused on having large fruit,” says Davidson. “Traditionally there’d be a stronger acceptance of smaller fruit. But right now, anything that’s small is more of a challenge.”

McClarty notes that retail strategy is also factoring into the demand for stone fruit. “Each retailer has a different strategy in dealing with COVID-19. Some are going with bagged, some are only selling premium sized,” he says. “There are a bunch of different strategies out there.”

As for pricing, McClarty says there aren’t any aberrations from historical pricing at the moment on stone fruit. Davidson also expects stone fruit prices to be at last year’s levels as well. 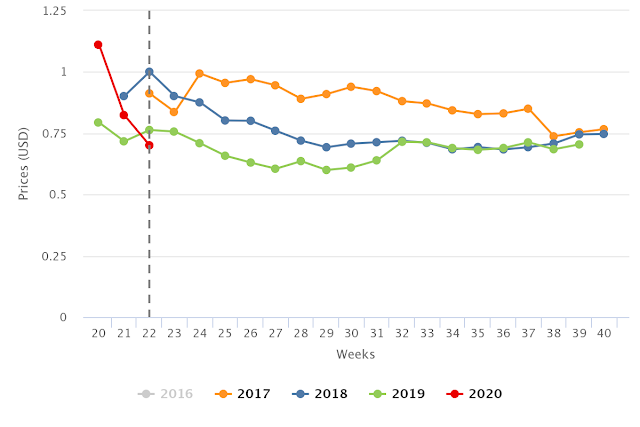 Meanwhile on the East Coast, Georgia is seeing a strong supply of peaches, albeit not as strong as last year’s bumper crop.


Volumes (in LB) of peaches from Georgia in the US market 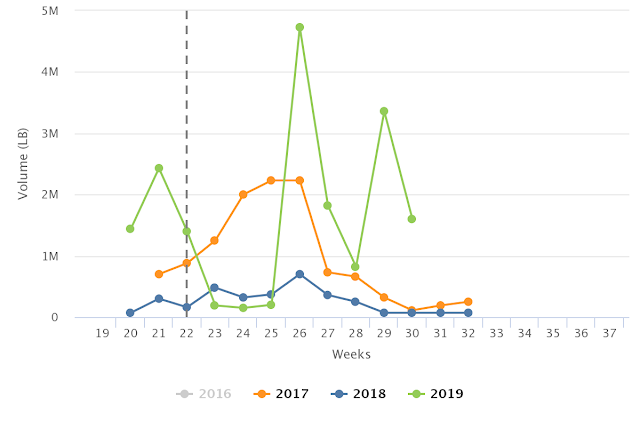 Will McGehee with Genuine Georgia in Fort Valley, GA. notes that peaches are only slightly smaller than last year thanks to a hot March that affected sizing. “But it’s only slight. Last year was also a good crop for size and quantity and this year’s sizing is more normal. Last year was exceptional,” he says.

Meanwhile McGehee says that going into the season, demand for peaches was an unknown given the fruit isn’t a storage item like citrus or apples have been in the height of pandemic-related shopping. “But demand has been through the roof,” he says.