Overview of the blueberry season by Ching Lee of the California Farm Bureau Federation, complemented by charts from Agronometrics. 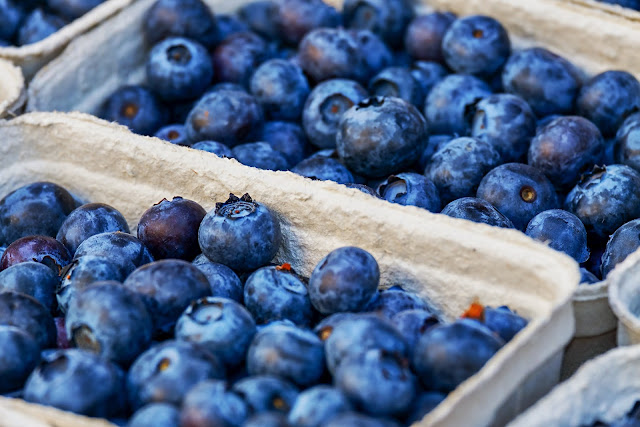 Larger volumes of blueberries have inundated markets already rattled by COVID-19, pushing prices lower for farmers as the cost to bring their crops to market has risen.

California blueberry production is expected to hit a record 77 million pounds this year, with peak production in the next two weeks, said Todd Sanders, executive director of the California Blueberry Commission.


Volume (in LB) of blueberries from California in the US market 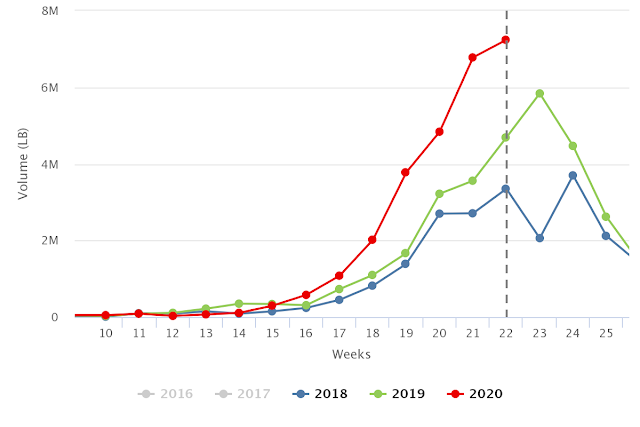 American consumption, however, has not kept pace with the bigger volumes coming from California and other growing regions, particularly Mexico. Sanders said imports from Mexico continue to flood U.S. markets, pressuring prices.

"Growers are really struggling," he said, adding that they're "making economic decisions" about whether to harvest their fruit this year. "We haven't even hit peak and we've seen the price drop dramatically as the volume increases."


Evolution of the price and volume of blueberries in the US Market. 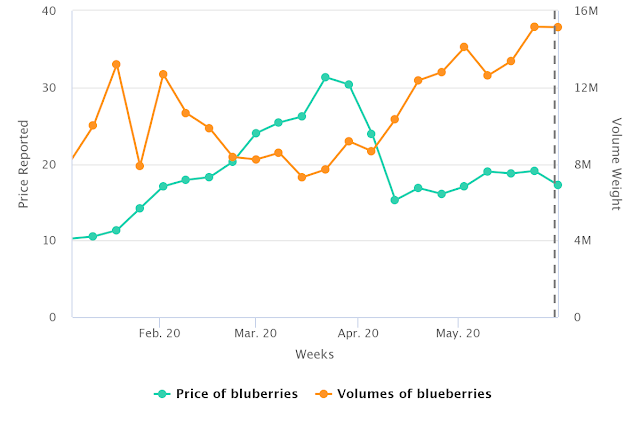 COVID-19 has slowed retail foot traffic, with fewer shoppers buying fruit in stores, and supply-chain problems have slowed the berries reaching supermarket shelves, he added. Another challenge, he said, has been encouraging U.S. retailers to buy local blueberries first before looking to often-cheaper Mexican imports.

Greatly reduced demand from restaurants, hotels and other food service buyers has dried up an important market that uses about 20% of the state's blueberries, Sanders estimated. Farmers and marketers whose food-service contracts were canceled now face a difficult time finding new homes for their berries. In a more-normal year, he said, they could try to sell fruit to processors for juice or for drying, but huge volumes have easily filled that market this year.

At the farm level, social distancing and other mitigation measures to combat the coronavirus have increased production costs by 20% to 25% in the field and in the packing shed, estimated Bill Steed of Fairfield Farms, a grower/packer in San Diego County.

Assuring more spacing requires more supervision of work crews, he noted. Though there's "ample labor" because many people are out of work, Steed said farmers are hiring pickers who are "not as skilled" or have never harvested blueberries.

"It's expensive in every sense of it: time, materials, production levels, efficiencies, everything," he said. "You're paying more for that and yet the price of the product is coming down" by at least 30%.

Because people are not grocery shopping as often, Steed said, buyers have become more conservative in their purchasing, as they don't want to be stuck with too much of a perishable product.

"Most years, you have a pretty steady stream of purchasing," he said. "This year, it was all or nothing. You couldn't forecast the next week."

Bixler Ranch is about three weeks into its blueberry harvest, using hand labor only for its young plants that can't be harvested by machine.

Though most of the state's blueberries are still picked by hand, Grimm said farmers are trying to move to mechanical harvest, "because when you're getting $2.50 a pound on blueberries and it costs you 90 cents to pick them, by the time you pack them and you have your cultural cost and everything else, you're either breaking even or going in the red."


Price (in USD) of blueberries from California in the US market 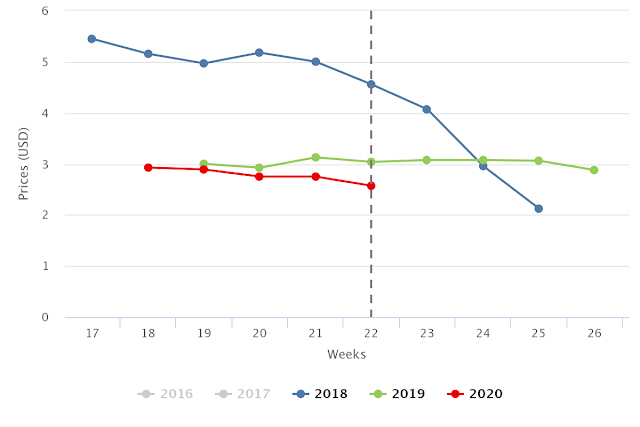 The challenge, he said, is the "astronomical" cost of the machines—about $300,000 apiece. Because mechanical harvest "hasn't been done a lot," he added, many marketers are "not receptive to it," even though "you wouldn't know the difference" between blueberries picked by hand and those harvested by machine.

Jerry Connery, who markets berries for California Giant Berry Farms, a grower/packer/shipper in Watsonville, said he's "not a big fan of the machines" but adds, "You will see more mechanical harvesting eventually—not yet."

Steed said though he's "continually evaluating" mechanical harvesters and "would love to be able to do it," he's not ready to go that direction. In particular, he said he doesn't like how the machines knock off unripe fruit with the ripe.

Santa Barbara County farmer Carol Mahoney, disappointed that the price of blueberries has "bottomed out" especially during peak season in May, said this is the first year her farm is not using contract labor to pick her fruit. Wanting to "eliminate the middleman," she said she's also not marketing her berries wholesale for the first time this year, instead relying mostly on her U-pick operation, one farmers market and selling a small amount to another farmer who operates a roadside stand. Her U-pick business so far has quadrupled, she said.

"This year, from the moment we opened the gate, we were slammed," Mahoney said, adding that she thinks people are "just dying to get out" of the house due to the lockdown. Whereas she used to close two days a week, she's now open every day "because it's been so crazy and there's such a demand."

Mahoney described how challenging it was to get direction from the county and other government agencies about what the U-pick operation needed to do to comply with virus-mitigation measures. But with the lateness of the crop this year, she said by the time her farm opened on April 22, people were already used to the practice and "automatically distancing themselves."

With 15% to 20% of the state's blueberry crop destined for foreign markets, Sanders stressed the importance of exports to take pressure off the domestic market and to help elevate grower prices. Though Canada remains the state's No. 1 export market for blueberries, Sanders said the commission has been working to develop markets in nations including Vietnam, the Philippines and Singapore.

With the Phase 1 U.S.-China trade deal signed earlier this year, he said the two nations are on the verge of finalizing a phytosanitary protocol to allow U.S. blueberries into the Chinese market. Completion of the protocol may come "on the tail end" of the California blueberry season, he said, but should allow Oregon and Washington growers to export some of their crop.