Overview of the asparagus season by Craig Rolandelli of JMB Produce, complemented by charts from Agronometrics. 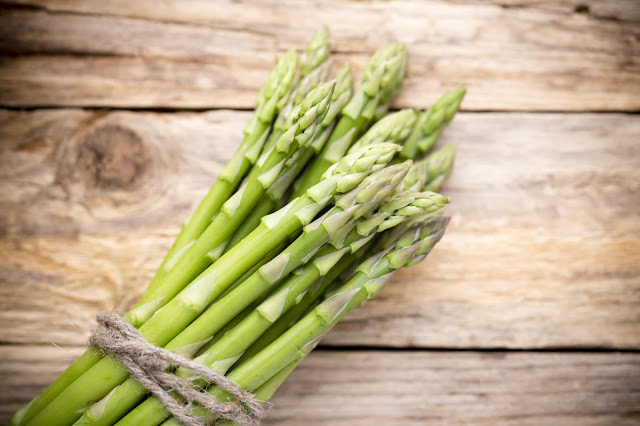 Original published in FreshPlaza.com on May 5, 2020

“There are extremely light supplies out of Mexico and Peru. California asparagus is going strong and has very good volume right now. But California can’t make up for the lack of Mexican supply,” says Craig Rolandelli of San Ramon, Ca.-based Jacobs, Malcolm & Burtt (JMB), noting California will go until mid-May. “Supply volume will also go up after mid-May when the Guanajuato area of Mexico gets started.”

While lighter volume tends to come from Mexico at this time of year, Rolandelli says it seems lighter than normal. “It’s been going on for about two weeks which has caused markets to go up significantly,” he says.


Volumes (in LB) of asparagus from Mexico in the US Market 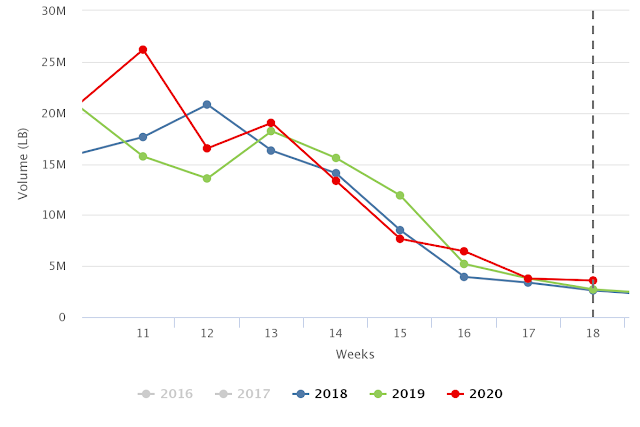 On demand, it has been very strong for California asparagus. But overall demand has been flat for some time now. “There was no big Easter pull this year due to COVID-19. We’ve also lost foodservice and export business has been way down, particularly to Asia,” he says. In addition, when supermarkets began culling their SKUs to contend with the panic shopping that was overwhelming grocery stores in late March, while green asparagus stayed in stock, Rolandelli says some of the specialty SKUs such as organic and purple asparagus had been reduced.

Yet, pricing is strong currently on asparagus. “11 lb. boxes in the past week and going into Mother’s Day are in the mid $30 range,” says Rolandelli, noting the markets are generally up around this time of year. Last year at this time, conventional asparagus was between $20.90-$24.90.


Prices (in USD) of 11 lb. boxes asparagus in the US market 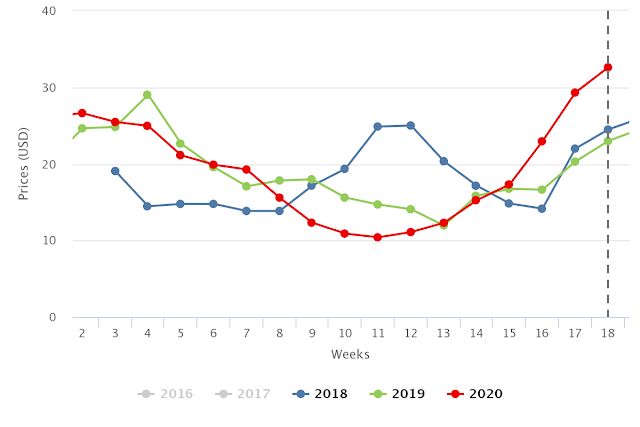 Meanwhile Jacobs, Malcolm & Burtt has recently launched a new website (www.jmb-produce.com) which includes features such as the company’s growing regions and availability on its products. The launch coincides with the upcoming summer asparagus program which comes from Central Mexico. The company anticipates increasing both its conventional and organic supplies with new acreage coming online over the next year which will add to the over 4,000,000 cases of asparagus the company ships annually.