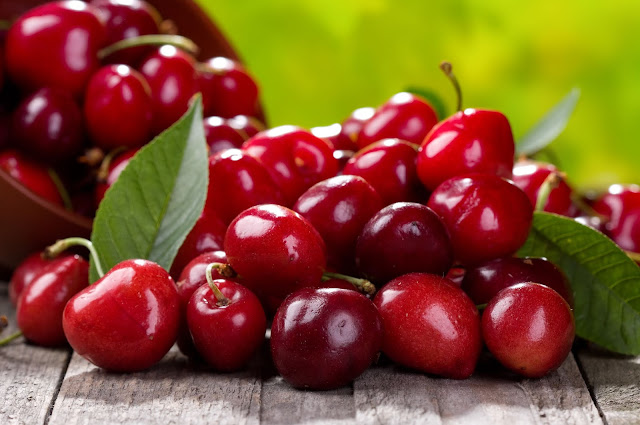 Original published in ThePacker.com on May 22, 2020

The Northwest cherry harvest won’t reach last year’s 23 million 20-pound boxes in 2020, but there will be plenty of fruit for consumers in the U.S. and beyond, suppliers say.

The preliminary estimate for this year’s crop was about 19 million to 20 million boxes, according to B.J. Thurlby, president of the Yakima-based Northwest Cherry Growers, an organization with around 2,500 cherry growers in the Pacific Northwest. The group released an official estimate of 20.5 million 15-pound boxes in early May.


Volumes (in LB) of cherries from Washington in the US Market 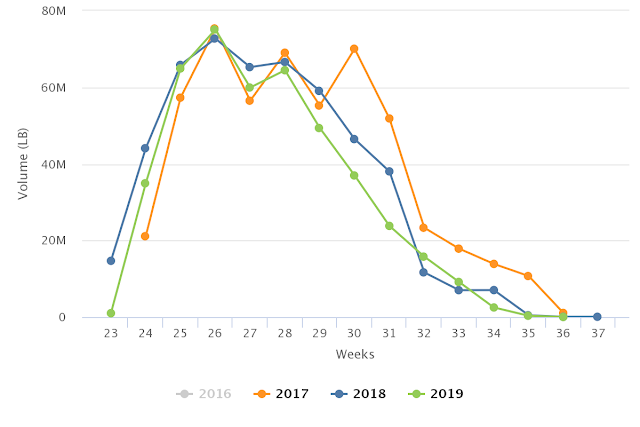 It was running a couple of days early, too, Thurlby noted, estimating May 27 as the start date.

“We’ve had a few frost issues this spring, but that does a good job of thinning the trees, so the growers don’t have to do it,” he said.

Thurlby also based his forecast on an assumption that weather would cooperate during the fruit’s maturation.

“Still, only 80% of our fruit has been through bloom yet, but we think it’s safe to say it’s going to be a little short but plenty of fruit for promotion,” he said April 24.

“A smaller crop load on trees generally bears bigger cherries, so we anticipate jumbo sizing in this year’s crop,” she said.

“There’s still lots of time to go before the season begins, but whatever the crop comes in at, we will look forward to building consumer demand through our program that focuses on differentiation through flavor and telling the story of our farms and family to shoppers.”

Harvest will begin slowly the last week of May, then ramp up the following week, “with some good volume,” said Chuck Sinks, president of sales and marketing with Yakima, Wash.-based Sage Fruit Co.

“The Northwest crop should peak around the 18th of June, so we should have good supplies for the Fourth of July selling time frame,” Sinks said.

“Similar to last season, the overall quality looks to be good, with a good supply of large fruit for ad promotion activity.”

The 2019 cherry market was good, and 2020 should be comparable, said Jon Bailey, sales manager with Vancouver, British Columbia-based The Oppenheimer Group.

“Last year was one of the best in recent history for us, as the late season ended on a high note,” he said.

“We expect similar markets for this year, although due to the ongoing COVID-19 pandemic, air space is going to be limited and more expensive.

We’re hoping things settle down by the time we get started and that we can continue to meet the international demand for our cherries.”

“Demand is indeed returning in most markets, leaving the challenge of actually getting the fruit there as our main hurdle,” he said.

“We are also expecting to see more demand for ocean shipments, which I’m sure we will be able to meet, but it will not be a drastic increase, as there are risks in guaranteeing good arrivals and a tenuous marketplace.”

“At this point, we’re forecasting about a 25% loss against our original estimates, due to that frost damage,” he said.

But, Davis said, Oneonta Trading will have ample volumes of cherries.

“By the end of the first week, we’ll be up to full speed and have healthy volumes through to the end of July,” he said.

“With the Fourth (of July) falling on a weekend, we’re well set to promote for a pair of ad weeks leading into that. With the uncertainly due to COVID-19, we’re cautiously optimistic for this season. Despite being down in volume as a state, our addition of Stadelman Fruit to our family has us positioned well to service our retail partners in a great way this cherry season.”

The crop should be better this year than last in northern stretches of the Northwest growing region, said Tim Evans, general sales manager with Chelan, Wash.-based Chelan Fresh Marketing.

“We had a really nice bloom but didn’t get a very good pollination last year compared to this year,” he said. “We’re forecasting an increase in the north.”

“There’s a very nice, long, drawn-out spread from the early to the later varieties from the south to the north this year,” he said. “That’s always good for an orderly marketing season. It looks very positive for a very good spread between early and late.”

COVID-19 and the market

“We are expecting retailers to be more strategic about their promotions,” she said.

“With an expected reduction in store foot traffic, we expect to see an increase in online promotions as well as an increase in packaging suitable for home delivery and curbside pickup shopping.”

While some consumers likely will be affected by the pandemic, CMI is “closely tracking” new retail consumer survey data that shows 36%-46% of consumers are not financially impacted, Huber said.

“This segment of the population is not necessarily looking for deals and value packages, but they are looking for the brands they trust, and the items they love; for many, Washington cherries are highly anticipated and consequently this special produce item remains one of the most coveted items in produce,” Huber said.

At Kelowna, British Columbia-based BC Tree Fruits Cooperative, crop timing at the end of April appeared to be “within a few days of last year,” said Laurel Van Dam, sales director.

“Our region spans from the Canada U.S. border 2 hours north to Vernon in the Okanagan Valley and then over into the Creston area of the Kootenay region, she said.

“It’s looking like a few days earlier than last year in the southern region, with similar timing to last year in the north and Creston. First picks may be around June 12 with limited volumes, but it’s early and there are lots of warm or cold days that can change that timing. We’re just getting into bloom in the south now.”

BC Tree Fruits’ cherry deal generally peaks in mid-July and runs into the first two weeks of weeks of August, Van Dam noted.

“Every retailer and other packer that we talk to doesn’t know how consumers globally are going to take to cherries this year. Will COVID-19 and the economic fallout from it hurt overall demand for what some consider a luxury fruit? We’ll be watching the markets closely to see how California and Oregon/Washington do.”

“We certainly expect promotable volumes and look forward to delivering our ‘healthy comfort food’ to consumers, who will be craving their familiar sweet summer cherry ritual,” she said.

Selah, Wash.-based Rainier Fruit Co. expects to kick off its cherry harvest with organics in the last week of May, with conventional following a few days later, said Blaine Markley, director of domestic sales.

“This year's crop is looking to be smaller in volume than last year, but we are excited for the quality of fruit we are seeing on the trees," she said.


Volumes (in LB) of cherries from the US, in the US market 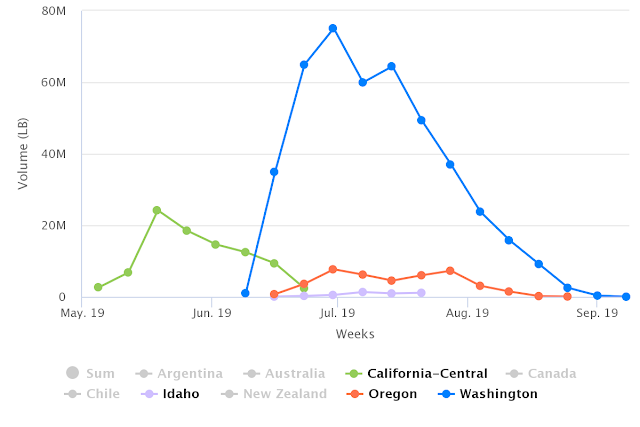