Overview of the Mexican grape season by Miky Suarez of MAS Melons & Grapes, complemented by charts from Agronometrics. 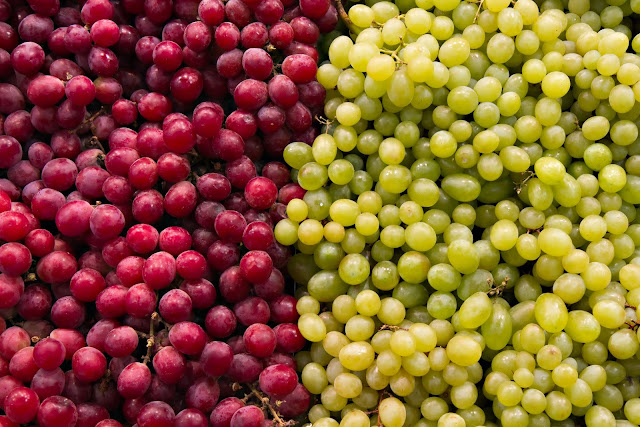 Original published in FreshPlaza.com on May 26, 2020

Monday, May 18, 2020 marked the first day of grape harvest in Hermosillo for MAS Melons & Grapes. “Harvest started about 10 days later than normal,” says Miky Suarez, Founder & CEO of the company. “At the beginning of the cycle, in early January, the growing season started off well. Enough chill hours were accumulated for the plants to go dormant and rest.” It was a pretty smooth ride until the second half of April. “These last weeks of April and even into May, the weather was cooler than normal. As a result, grape harvest in Hermosillo started last week as opposed to the first or second week of May.”

“We have started picking green grapes,” said Suarez. “The red varieties have been very slow to mature and aren’t ready yet.” On the positive side, a later start also means that Chile is almost out of the market. As far as green grapes, Chile has finished and the overlap with Mexico is non-existent. When it comes to red grapes, Chile is still shipping some, but not many. “For us, it was good to be late. Otherwise, we would have started with big inventory in the US and Canada.


Volumes (in KG) of grapes in the US market 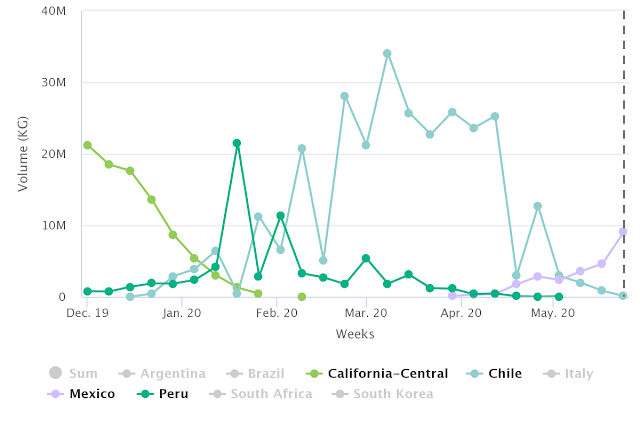 In the State of Sonora, the Guymas region is the first region to start harvest, followed by Hermosillo and Caborca. Suarez expects Caborca to start around June 1, which will also be about 10 days later than normal. The Mexican grape harvest is expected to run until the first week of July with strong volumes being shipped through the last week of June. If the California grape season doesn’t start early, Mexico should be able to finish its season before California starts.


Overlap of the Chile, Mexico and California grapes season in 2019 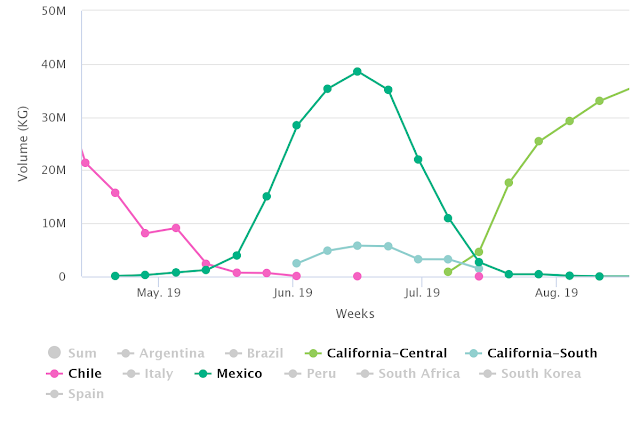 Overall, Sonora production is projected to be 20 million boxes this year, down from 23.5 million boxes last year. “Frost during the first week in February has affected yields,” commented Suarez. “It is bad for the growers that were negatively impacted by the frost, but in general I believe lower production will help us. The crop will be more manageable, which will result in better movement.”

Flame will continue to be the prominent grape variety coming out of Sonora. “It’s a very important variety for the state as it matures earlier than other newer varieties that have been developed. There is no other red grape variety that’s available this early in the season,” Suarez shared. However, new varieties will take center stage this season. “2020 marks the year in which new varieties will be significant for our business,” he commented. Jack’s Salute and Sweet Celebration (red varieties) as well as Early Sweet, Ivory and Sweet Globe (green) are all new varieties that were available in limited quantities up until this season. “We will have bigger volumes for all of these varieties this year.”

MAS Melons & Grapes distributes its grapes in pouch bags as well as 2 lb. and 4 lb. clamshells across the US and Canada. About 25 percent of the company’s grapes are exported. “New Zealand is our main export market, but we have also been able to increase our business into Japan in recent years,” said Suarez. This year, opportunities have presented themselves into Korea and China’s mainland. “Another growing region has been Central America and the Caribbean.”

One day at a time

Suarez is positive about the Mexican grape season. “In light of the current environment, we take things one day at a time. We’ve seen good activity and movement from grapes out of South America and are hopeful this will continue for the Mexican grape deal. So far, so good but we don’t know what will happen tomorrow.”