Big mango crop on tap, despite some weather issues

Overview of the Mexican mangoes season, complemented by charts from Agronometrics. 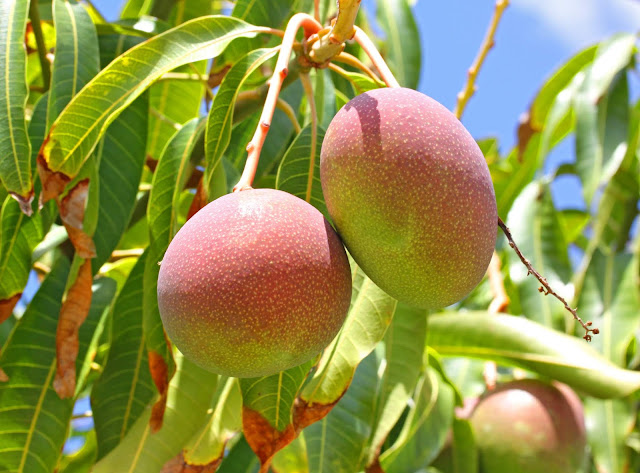 Original published in ThePacker.com on April 21, 2020

Weather is testing some mango varieties in Mexico, but suppliers say they anticipate plenty of fruit for spring and summer promotions.

“The season started with similar overall volumes as the previous year and with consistent quality,” he said.


Volumes (in KG) of mangoes from Mexico in the US market 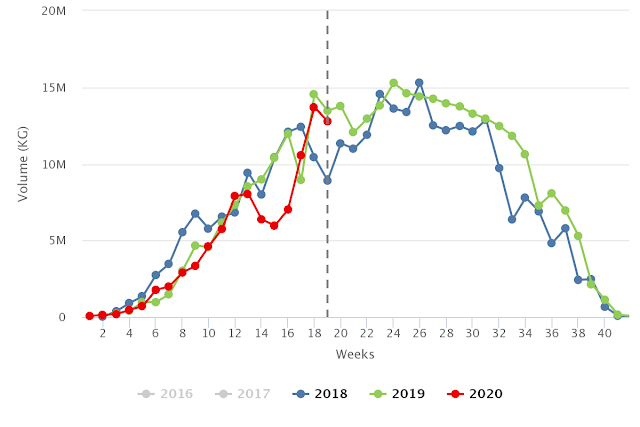 “As the season heads into the peak of the summer, there are some production areas — Michoacán, Nayarit and south Sinaloa — that are behind by two to three weeks, but, overall, volumes are expected to be similar to slightly lower than last year and quality is expected to be exceptional.”

Volume out of some Mexican regions was “strong” and bound to accelerate, said Clark Golden, partner in Vineland, N.J.-based distributor Amazon Produce Network.

“We’re in the Oaxaca season, and (the) next region, Michoacán, is already rolling with hadens,” he said March 26.

Tommy atkins crops were delayed and “could be 20-40% less than last year,” Golden said.

“There was less flowering because, in December and January, the trees were not nearly as stressed,” he said.

Keitts out of Nayarit are delayed, with significantly less volume, also due to less flowering, Golden said.

A productive Oaxaca season will wind down by the end of April, said Alex Arcos, chief marketing executive for Nogales, Ariz.-based Palenque Foods.

“Not too many weather issues have come into play this season; the only thing to mention are some rough winds that we had by the end of February and beginning of March, which was due to the cold fronts from the north of the country,” he said.

“This caused mangoes to fall off the tree before time — approximately 30% of the crop production.”

“We will be harvesting ataulfos by the beginning of May, followed by the tommy atkins one month after,” he said.

“While Nayarit’s production level is slightly less than Oaxaca’s, we can certainly say that we will be harvesting mangoes from Nayarit until the beginning of August.”

“Right now, the weather is in excellent shape in Mexico; we have three regions coming at one time — Michoacán, Oaxaca and Chiapas,” he said.

“You can expect supplies to increase as we get further into April. Sizing will drop — more small fruit than big fruit — you’ll see f.o.b.s that will be very reasonable and promotable.”

“The quality of the fruit is good, but at this particular moment, we are having to push shippers back and hold them back from shipping,” he said.

“Many of the retailers stopped promoting for a few weeks until they understood what was going on in their area.”

“The crop was slightly delayed this season from first projections, but it is now available and will be consistent through the month of April,” he said.

In Mexico, Robinson Fresh was seeing “good production” out of Oaxaca and Chiapas, Rossignoli said.

“However, there has been a bit of more challenging weather out of Michoacán, Mexico, and that is impacting production from that region. This has caused delays in flowering events, which prolonged or set back production, and thus we have also seen a reduction in the overall yields from this region,” he said.

Any long-term impact was tough to predict, because “we’re still a little early in the season,” Rossignoli said April 3.

“We do expect the production volume from Michoacán, Oaxaca and Chiapas to increase starting mid-month and heading into May and June,” he said.

The “longer-term forecast” for volumes out of Jalisco, Sinaloa and Nayarit, Mexico, was positive, Rossignoli said.

“The quality should be excellent and, when these regions come to market in the U.S during the months of June and July, it will be a great time for retailer and foodservice providers to promote the product,” he said.

The mango market has been up and down, as COVID-19 has closed many foodservice channels, said Gary Clevenger, managing member and co-founder of Oxnard, Calif.-based Freska Produce International LLC.

“The crop is very normal so far out of Mexico; what is not normal is the climate in the consumption in the U.S.,” he said.

Peru had record volumes for winter markets, and that pulled down prices, but things stabilized in early March, as fruit began to arrive from Costa Rica, Mexico and Guatemala, said Jessie Capote, owner of J&C Tropicals in Miami.

“Weather so far has been good in all three countries, resulting in excellent skin blush and sweet-tasting fruit,” he said.


Prices (in USD) of mangoes by size, in U.S. market 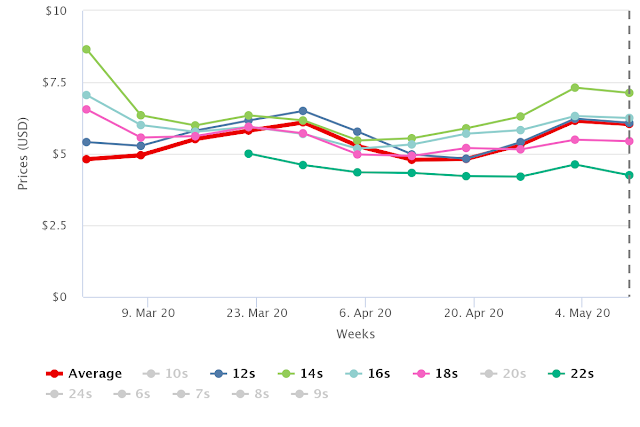