Grapes: The market should be fully transitioned to Mexican supplies by second week of May

Overview of grapes supplies in U.S. market, complemented by charts from Agronometrics. 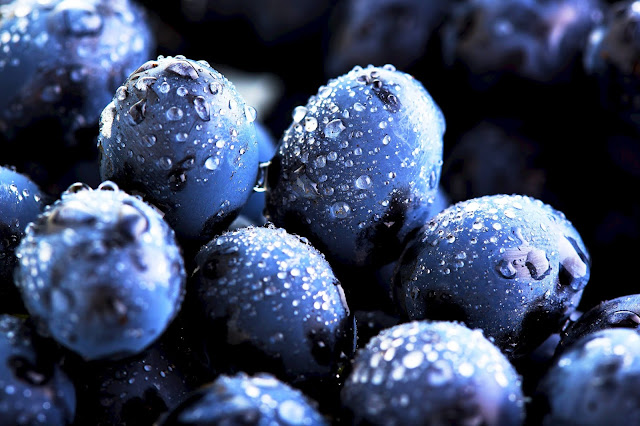 Original published in FreshPlaza.com on April 30, 2020

The Chilean grapes are still entering the US market, though the volumes that were sent last week saw a sharp drop. This was accompanied with soft demand during that same week, though, according to Ira Greenstein at Direct Source Marketing, this is typical for the end of a five-week calendar month.

The supplies coming out of Chile look to be enough to carry the US into the Mexico supplies. Greenstein says: “Mexico is projecting another large crop and with so much uncertainty in the market we can expect FOB’s to get to promotable levels much faster than in previous seasons.” Reports have indicated that there is a large Flame Seedless crop hanging, but, says Greenstein “we won’t see any meaningful volumes of these crossing the border until the middle of May.”

Greenstein also mentions that table grapes will likely take a backseat in demand due to the spring commodities that are entering the markets such as California strawberries and cherries.

For the Chilean red seedless grapes, the FOB pricing has remained steady in the past weeks, though, Greenstein says, the pricing could inch a bit higher for true premium lots starting the first full week of May. “Importers with contract programs in place are moving through shipments in a controlled fashion, while others are challenged with an excess of on-hand inventories. Importers will likely keep FOB’s competitive to make sure they work through the balance of Chilean supplies over the next few weeks”

The red seedless grapes on the market are seeing a wide range of quality and condition, Greenstein shares. “The overall quality and condition have held up extremely well,” he says. “Interestingly, Crimsons are holding up significantly better than proprietary varieties like Timco and Allison. The industry is still learning a lot about these new varieties and how well they hold after temperature break and exposure to methyl bromide fumigation.”

Green seedless will fully transition to Mexico by mid-May Chilean green seedless volumes are winding down and the quality in the market isn’t the best, Greenstein says. “With only minimal volumes of premium storage Thompson seedless left, importers are having to repack suspect quality fruit in order to fulfill program commitments. The pricing remains split with premium fruit bringing in between $36-38 and less quality fruit being traded between $26.00-28.00” 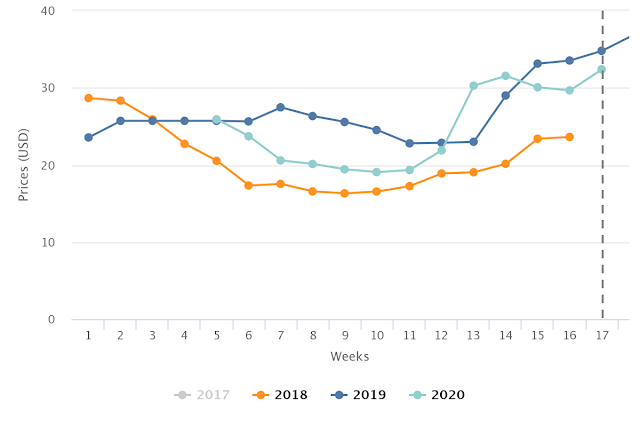 Mexican supplies of Sweet Globes have been crossing into Nogales over the past two weeks, though overall pricing remains very high. “It ranges from $38-$42 FOB Nogales,” Greenstein says. “Expectations are to see better supplies from Mexico over the next few weeks with a complete transition to Mexican fruit by the second week of May. The FOB pricing on all green seedless will likely remain elevated until production in Mexico comes fully online,” he says.

Due to the volatile demand in general that has been caused by the pandemic, retailers have been reducing SKU’s in stores to increase the efficiency of the supply chain. Black seedless grapes have been reduced in many stores because of this. “Demand has been so poor that importers have substantially discounted fruit to keep it moving through the system. The pricing on good quality black seedless currently ranges from $16-$18 on large and $18-$22 on x-large. The FOB pricing will likely remain at these levels until the import season comes to an end,” Greenstein says. 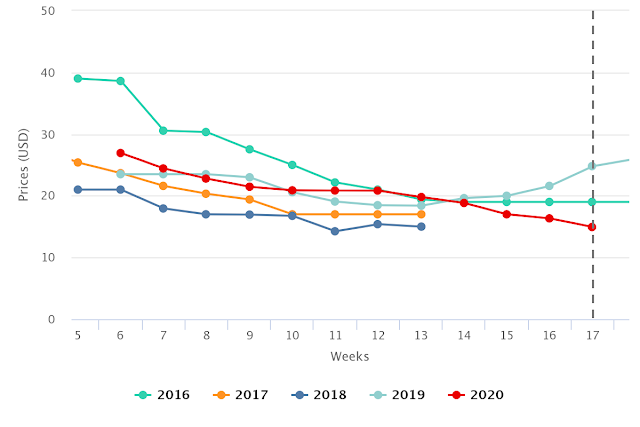 He concludes: “Some importers are still getting a premium for proprietary varieties like Midnight Beauty, while others are now looking to food banks to move aged inventory no longer good enough for retail.”