Overview of the end of the California Kiwi season, by Cole Firman of Coosemans LA Shipping, complemented by charts from Agronometrics. 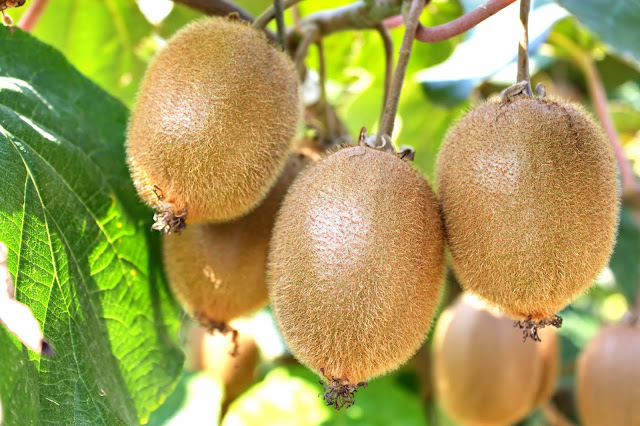 Original published in FreshFruitPortal on April 1, 2020

The US kiwi supplies come from multiple origins, including California, Chile, Italy and New Zealand. New Zealand mostly supplies specialty kiwis like the golden kiwi and the baby kiwis, while the other origins supply the green kiwi. The US is currently getting their supplies domestically, from California, whose season is running longer than usual this year. 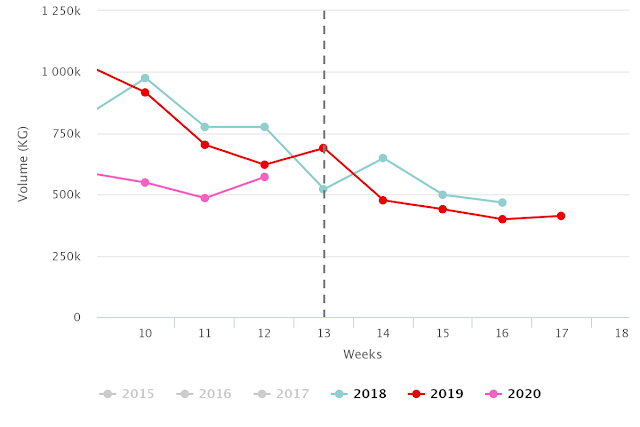 The California kiwifruit season usually runs from the end of October/beginning of November until the March. After the California season, the Chilean season takes over and supplies the US through November, with Italy helping to fill in any gaps that might occur. This year, though, the season is being extended and is expected to run through April. Cole Firman of Coosemans LA Shipping explains: “Due to the closing of the schools and the foodservice industry, currently the overall demand is lower than usual. So, the growers are either not picking as much fruit or putting together less shipments right now. Fortunately, kiwis hold for a long time so there’s no pressure to dump the product.” 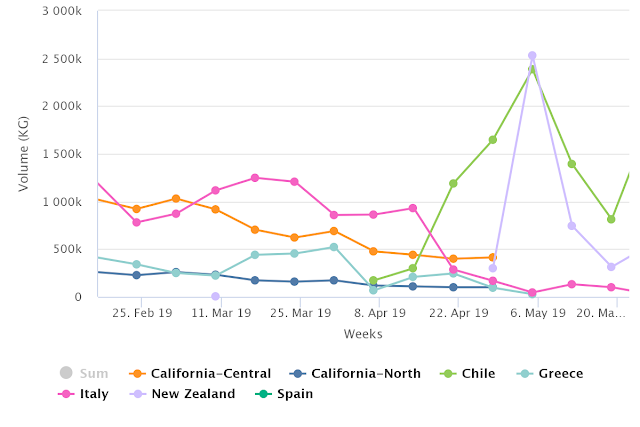 He adds: “We have been able to continue moving the kiwifruit, though we have noticed a change in the customer buying habits. There’s been an increased interest in the clamshell products, which could be because of the retail buzz surrounding the corona situation. But we continue to supply all our packaging options, which include the single layer trays, volume fill boxes, and clamshell options, not just for the green kiwi but also the baby kiwis, golden kiwis, and the new red kiwi.”

California’s kiwifruit has been of great quality this season, Firman says. “The quality improves every year and the growers have been delivering kiwis with a really good eating experience this season.”

Demand is picking up

Due to the extension of the California season, Coosemans is going to hold off on their imports from Chile. “I can’t speak for others in the industry, but we won’t be importing the Chilean fruit until the California season fully wraps up. Since we are in California, the quality of the imported fruit really can’t stand up against the domestic fruit, especially since the first shipments coming out of Chile usually have hard kiwis that still need some time to fully ripen,” Firman explains.

In the past few weeks, the kiwi demand saw a significant drop, but fortunately it looks to be coming back up. “We don’t know the reason for the drop, but since late last week and this week it looks like the demand is picking back up. Overall, we’re excited for the future of the kiwi, and seeing how the industry will continue to develop new varieties and perfect the fruit,” Firman concludes.