An abundance of strawberries in California

Overview of the California strawberry season, by Steve Johnston of G.W. Palmer & Co. and Dave Akahoshi of Plan Berries, complemented by charts from Agronometrics. 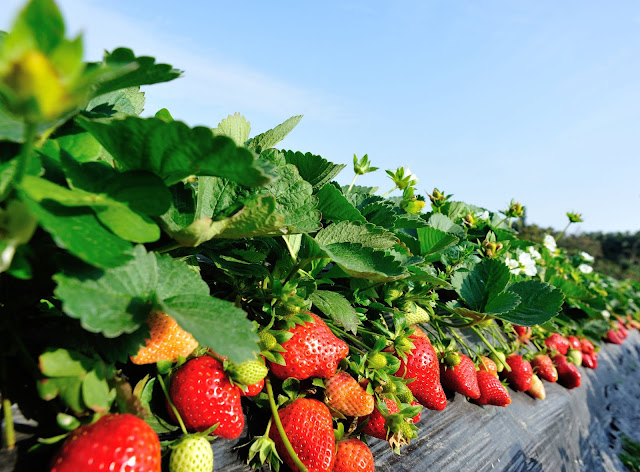 Original published in FreshPlaza.com on April 29, 2020

Supplies of strawberries in California are ample—possibly more so than usual in some parts.

“Supplies are very good right now,” says Steve Johnston of G.W. Palmer & Co. Inc. in Salinas, Ca. “But things have changed because of the potential oversupply, especially in our current economy.”

For example, some of the ample supplies in Oxnard, Ca. right now are being diverted to processing. “They’re strengthening their FOBs by eliminating a significant amount of strawberries. Not everybody’s doing it. But when they do send their berries to processing, they’ll be able to strengthen their position for Santa Maria and Salinas/Watsonville, Ca. They can’t harvest them all and keep the market up,” says Johnston.

In Salinas though, Dave Akahoshi of Plan Berries Inc., a hydroponic strawberry grower in Santa Maria, Ca. says that berry supplies are flatter than anticipated. “That said, things have warmed up so we could see a change this week,” he says, noting that unusually, until this week, supplies and demand of California strawberries had been relatively even.


Volumes (in KG) of strawberries from Central California (Salinas/Watsonville) 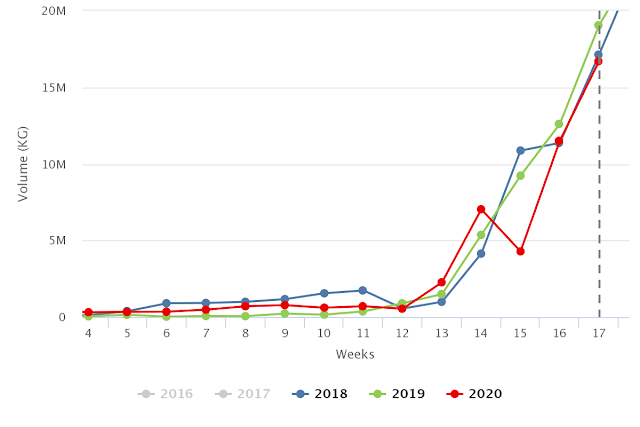 While the warm weekend in California, a state that virtually has strawberry production to itself currently, certainly helped push production on strawberries, this week’s warm temperatures are also helping. “We’re going to see Salinas/Watsonville’s numbers double what they’ve been, and Santa Maria is also going to have ample supply,” says Johnston. “What’s left in Oxnard will be a little bit. But the numbers of the whole industry will be a lot better this week than if they’d kept Oxnard going at full blast.”


Volumes (in KG) of strawberries from South California (Santa Maria/Oxnard) 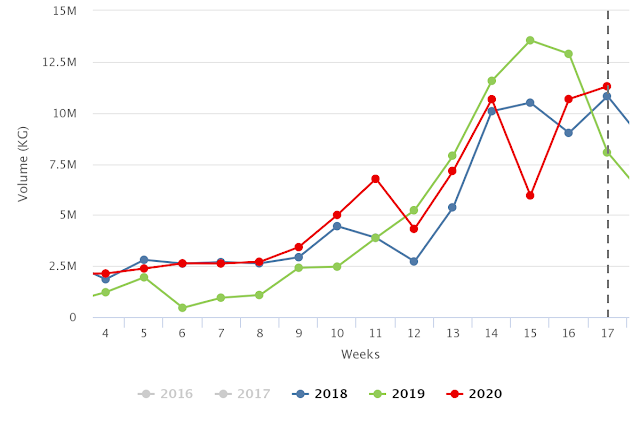 Meanwhile demand is strong on strawberries. “Consumers love them. If they’re not going out to dinner right now, then maybe the treat they get with their groceries are more strawberries,” says Johnston. He also adds that a significant number of ads around the country pushing strawberries also helped boost consumption, especially in the wake of virtually losing the foodservice side of the strawberry business for now.

So, all of this puts pricing at fair numbers currently. “They’re moving the crop. It could be a lot worse,” says Johnston. “After Easter, they had two good weeks where the market didn’t get away from them and that’s fantastic.”

Finding the balance on price

Akahoshi agrees. “Price is pretty fair and stable. It’s not ideal but given the circumstances, it could be way worse,” he says. “It’s been steady, and I think everyone on both sides have recognized the need for stability and they’re trying to figure out where the balance is.”

Looking ahead though, some concerns await. Akahoshi notes that greater volumes of strawberries are likely coming. “By mid-May, things will look different. At that point, we’ll see the balance tipping to oversupply. This year, with so much foodservice business gone, a lot of growers will struggle because the retail outlets are pretty much maxed out in terms of their ability to increase any movement.”

Johnston also adds that when cherries come into the market—California cherry production is just getting underway—this could also have an effect on strawberry demand. “Once cherries start, maybe retailers will start featuring cherries instead,” he says, noting that the lack of air travel now could also impact cherry exports and instead, more cherries may be pushed domestically.


Volumes of strawberries and cherries in the US market in 2019 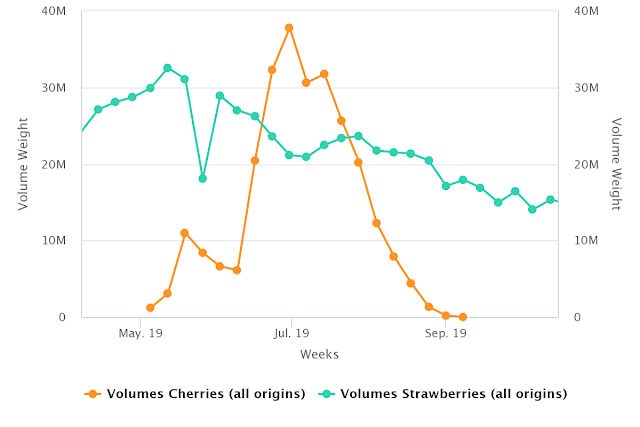 He also notes that Mother’s Day will be the event to keep an eye on for strawberries, particularly this year. “Mother’s Day is a huge event in the strawberry industry. Everyone always features strawberries for Mother’s Day,” says Johnston. “So, this year, if you’re not taking mom out to dinner, it’ll be really interesting to see how they do the ads because it’ll all be retail business.”