Overview of the potential impact of COVID-19 on future oranges supply and price, complemented by charts from Agronometrics. 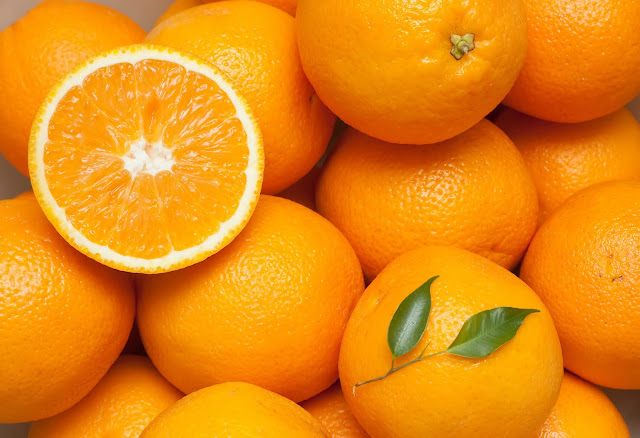 Original published in FreshPlaza.com on March 26, 2020

Oranges are seeing a serious spike in demand in North America that is likely tied to the COVID-19 virus making its way throughout the continent.

“We’re seeing increased demand from retail and wholesale while the foodservice sector has slowed down. That’s to be expected because of the change in the hours of operation and the manner in which foodservice can operate their businesses,” says Keith Wilson with Cecelia Packing Corporation in Orange Cove, Ca. “We’re in a demand exceeds supply situation right now.”

East Coast suppliers are seeing the same thing. “With the COVID-19 virus this last week, we’ve seen a pretty big spike in orange demand. People are trying to up their vitamin C so we’ve seen an increase in sales,” says GT Parris of Seald Sweet in Vero Beach, Fl. “While sales were normal, this definitely will help the bottom line and the grower.”

The tie to oranges

Both suppliers weren’t surprised by the surge in demand on the retail side for oranges. “With the SARS virus [15 years ago], there was a more pronounced and immediate reaction for citrus because the media was telling people to buy oranges because Vitamin C was for fighting it,” says Wilson. “This event is more driven by people looking to increase their food supply at home.”

That said, the health tie to oranges is still there. “I had a feeling we would see a big jump in sales,” says Parris, adding that the fruit is hitting peak quality now in color, juices, acids and Brix. “Anytime you go into a flu season, etc. people think of their vitamin C. But how long it’s going to last I don’t know.”

Seald Sweet currently has product from Florida and also continues to bring product in from Mexico. “Our supplies are no different than any normal year at this point. Because we’re deemed essential, they haven’t shut us down or stopped the flow so we’re going as if it’s normal,” says Parris.

On the West Coast, it’s a slightly different scene affecting supplies. “This current pressure on supply is driven in part not only by the disease and also a reaction to the weather that we’ve had out here. Rain has somewhat curtailed the amount of fruit that we’re able to harvest,” says Wilson. “The pressure was almost immediate and almost unprecedented, drying up supply within a matter of days. It was unbelievable.”

And now, a few questions lie ahead for the remainder of the season. “We’re wondering if there will be a bounce? People are going to the stores to buy heavy supplies of food. At some point, will they have enough at home and will the demand picture change?” asks Wilson. He also notes that with the California season being supply-demand driven—on short crop seasons for example, the state would wrap up orange production sometime in April. Last season there was no gap in supply from California to the import season that begins in July—Cecelia Packing isn’t sure how long the season will go this year. “The target for most people was probably sometime in May, possibly June. But now I believe that’s going to change,” says Wilson.

Meanwhile over at Seald Sweet, pondering over the fresh season versus the storage season is starting to happen. “My goal was to have fresh Florida Valencia oranges most of the way through May. And then typically we have a storage program that usually starts around June 1st. This year may be a bit different just because right now demand is pretty good. Typically we start putting storage away here shortly,” says Parris. “But if demand like this keeps up, we may go through our storage program faster. We’re just hitting that crucial stage where we’re trying to think about the future.”

All of this means that pricing is stronger of course. “There’s no gouging—so no doubling of prices or anything like that. Pricing has just crept into the range where the grower can make some money finally,” says Wilson. “Leading into this, some sizes and grades were being sold at less than the cost of production. But now, pricing is still pretty reasonable on a 40 lb. box of oranges.”


Reported prices (USD) of oranges in the US market, compared by origin. 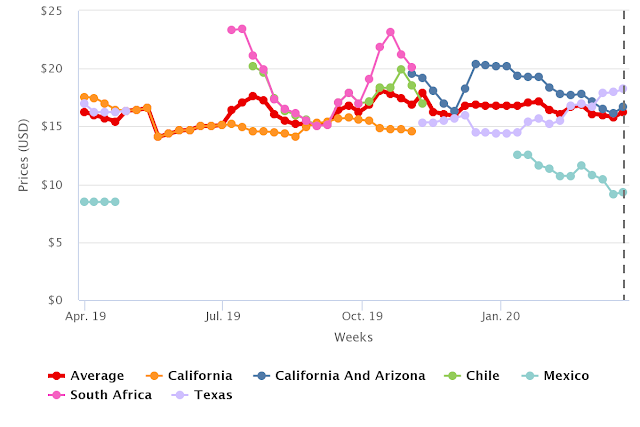 Looking ahead what also remains in question is the import season. “We’ll bring in product from Morocco assuming they open up,” says Parris. “I think they’re shut down for anyone working. So we’ll see.”