Avocados in Charts: Forecasting in an unstable market 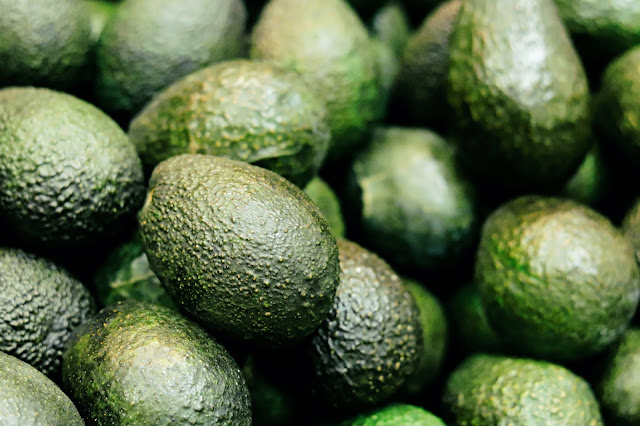 On Feb. 24 I wrote an article comparing the current market environment to 2017, in which I predicted that prices would fall in short order. Needless to say, that didn't happen, as market prices have followed in an incredibly similar pattern to 2017.

In this article, I look to reconcile my previous forecast with the latest market information available and offer some insights into what could happen in the months ahead. 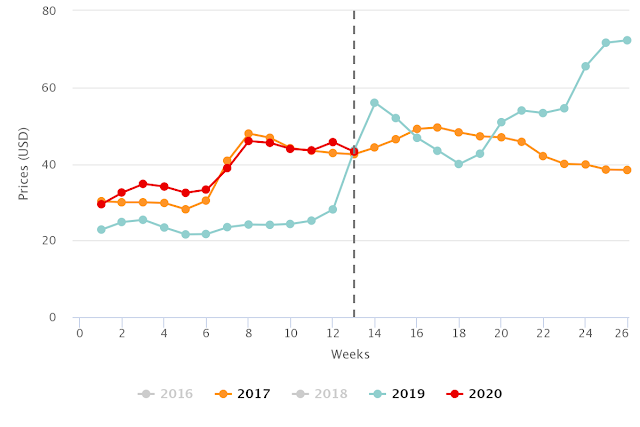 Since week 9 (when the previous article was published) through week 12 (the last week of actual volumes published), the HAB is reporting total volumes that are 17% lower than what was originally forecasted. In week 10 alone, the total market volume forecasted was 71.4m pounds, however only 47m pounds were actually shipped. Almost all of this missing fruit is from Mexico

The end result has seen volumes coming in a bit under last year. The effect of lower supply has been keeping the prices higher. Assuming normal growth in the market, prices are still higher than what would have been expected if we would have known the volumes ahead of time. But that can also be attributed to volumes to programs being over prioritized, leaving the spot market short. 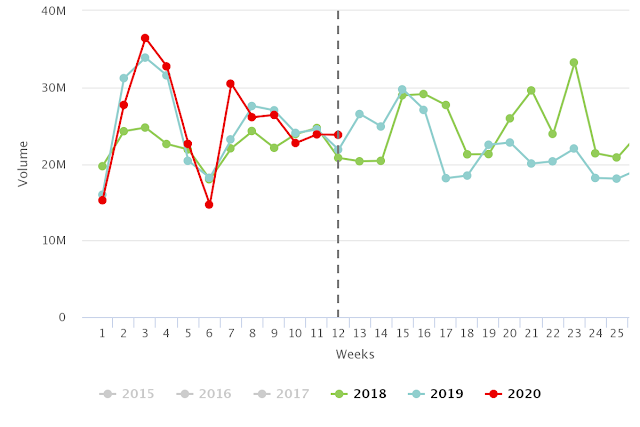 So what happened to Mexico's Volume?

There are a bunch of theories on this going around, but in effect they all agree on the same conclusion - fruit is being held from the market on purpose. The story that makes the most sense to me relies on market psychology and can be best appreciated by taking last year's pricing into context.

This theory goes that producers might have been understandably frustrated last year for having shipped all their fruit earlier at rock bottom prices, only to see the market double right as they had run out. So in anticipation of higher prices right around week 13, producers have held fruit to be better prepared for the later part of the season.

Generally speaking, I would applaud this kind of effort, anticipating the market and preparing for it is a sensible thing to do. And although the last couple of weeks of good pricing have perhaps validated this approach to some, it is essential to look at the avocado markets as a single system, made of several complementing origins.

Enter California, Peru and COVID-19… lest we forget.

In my humble opinion as an analyst working entirely off publicly available data - and maybe some conversations here and there - the avocado markets are due for a re-alignment. The high prices that the market saw last year at this time will not happen again.

Hands down the biggest difference between this year is California, which is coming onto the market with a healthy amount of fruit, already surpassing the volumes they sent in 2018. Their increasing role in the market has contributed to the additional 2m kilos of fruit that arrived in week 12 - arguably the point in the season that sparked the price jump last year. 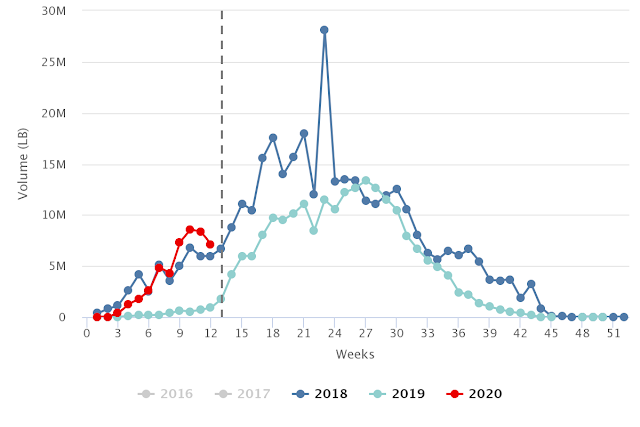 Peru is also an important contender to keep in mind. With the majority of their season going from week 21 to 36, they will coincide with both California and the end of Mexico. With 60% of their crop going to Europe in 2019, Peru is one of the more diversified origins during this time period.

However, the word on the street is that they’ll have a stronger crop than last year, meaning that depending on the situation in Europe they could see more fruit being sent to the US as well. 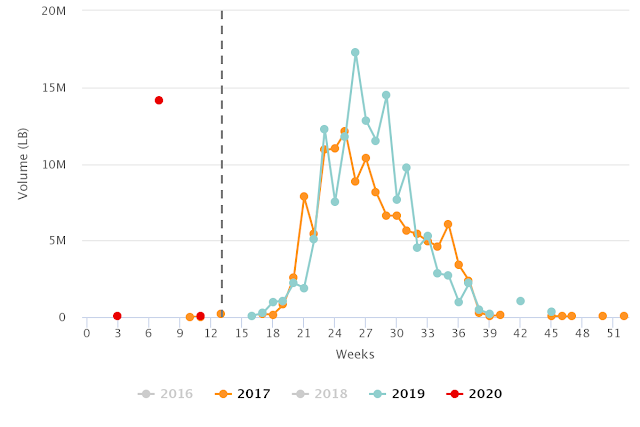 To get an idea of how this will all play out, I put together the current forecast for Mexico published by the HAB with 2018 California volumes from the USDA and 2019 Peruvian volumes (California and Puerivan forecasts have not been published yet).

This exercise offers a volume estimate that from week 13 through 23 gives us a 25% increase on last year. Fortunately, last year's volumes were particularly low, meaning that an increase of this magnitude should even out the market and get us to market prices closer to 2018 levels. 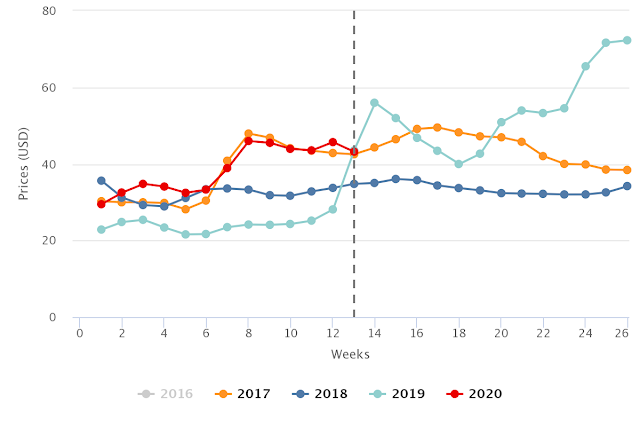 If prices end up like in 2018, this would be the best-case scenario. However, there are reasons to believe that every one of these forecasts could be on the low side - if Mexico is holding fruit which will need to come to market and thereby surpasses their current HAB forecast, if California continues to ship more volume than in 2018, and if Peru comes in with a stronger season than last year. Perhaps a 25% increase on last year is actually on the low side, meaning that prices could drop further still.

In a normal year, all of this would be an estimation I would be comfortable with, but this isn't a normal year. In hindsight, it seems evident that as China was being locked down and cases of Covid-19 found their way to other countries across the world, this would eventually happen in the US as well.

However, the sudden changes that this virus has brought about have caught many of us off guard. It seems like the US suddenly woke up to a dystopian reality where restaurants have closed and streets are empty and everybody is left to socialize through their phones. People are scared of going out on the threat of being contaminated by anyone who might get them sick.

The effects this has had on our industry have not been measured yet, or at least not published. But there are plenty of rumblings of an increase in demand for citrus and frozen products. Last week I wrote an article on the subject to try to offer an objective point of view on the matter, which was met with many comments from people who shared my opinion and others who brought to light many concerns I had not addressed.

The conclusion I was trying to bring to forward is that even when the stock market has taken a serious blow to the gut, demand for fresh produce remains stable, even for avocados. This isn't to say that all will be fine for the category. Clearly grade 2 fruit will take a serious hit as restaurants close. You can already hear stories that Mexican producers can’t move grade 2 even at discount. Murmurs also abound that consumers are buying less weight fruit as they don’t want to touch anything others have touched.

Apparently bagged fruit is doing better, probably for the same reason. This is all without mentioning supply-side issues such as labor, transport and logistical problems that could affect the category or any slew of other unforeseen factors that could creep us as the world's economy screeches to a halt.

It’s impossible for an analyst to speculate on every possible input into the market and guess correctly what its ultimate effect will be, but one can look at the best information available and draw conclusions from there.

Ultimately I still believe that there will be demand for fruit and that people want to continue to consume avocados. The format that they are consumed may need to change, clearly there won’t be as many eaten at restaurants, possibly pushing more consumers to grocery stores. The argument for bagged over lose weight argument sounds reasonable, which should become evident from retail data once it is available.

As the resiliency of the industries supply chain gets tested like never before, there is a slew of supply issues to contend with, possibly reversing the previous analysis made only a couple of paragraphs back meaning volumes could yet be lower than the 25% increase on last year that was expected.