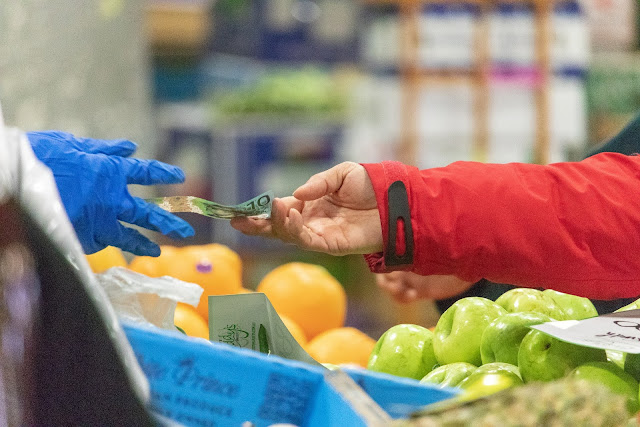 For many people, the events and shutdowns resulting from the Covid-19 outbreak have brought about harrowing times unlike anything they have known before. At the beginning of the month, many were contemptuous regarding Covid-19. Shortly after Italy went on lockdown on March 9 and Israel shocked the world by imposing a 14-day quarantine on anyone arriving in their country, the tone changed.

These previously “extreme” measures are now commonplace around the globe, and many borders, even in Europe, are shut altogether. The U.S. belatedly woke up to the threat, imposing restrictions on social gatherings at varying degrees from state to state. Without the opportunity for these measures to take effect yet, the progression of the virus has continued to increase dramatically, causing panic, emptying store shelves and in some cases turning neighbors against neighbors.

And the threat is real. The Imperial College in London estimates that without intervention 2.2 million people could die of this disease in the U.S. alone. I don't believe it is an overstatement to say that this is the biggest disruption to the global economic, social and political systems since World War II.

At the same time, for most of the world's population, the worst that will happen is that they will suffer the equivalent of a mild or average flu. Some won't even know that they have it at all. From a logistical standpoint, the biggest issue is a shortage of hospital beds and breathing machines for the most severe cases.

The expected infection rate follows a gaussian distribution. Where it isn't “flattened”, the number of severe cases will be more concentrated meaning that the limited resources available to help treat them won't be available to all. By flattening the curve through social distancing, those same resources can be used for several patients over a longer period of time, limiting the human cost of this pandemic.

That said, even the most modern economies do not have the resources to deal with a disease of this scale without drastic and early interventions. The U.S.’ belated response ensures that there will be a human price to pay, the question is how high?

The measures that have so far been implemented have come at a bewildering economic cost. Through the end of week 12, when this article was penned the S&P 500 has lost 32% of its value and is expected to fall further. In China there are reports that retail sales are down by 23%. Amid this chaos companies will go bankrupt, people will lose their jobs and national debts will soar as countries launch a barrage of stimulus plans to save as much of the economy as they can.

So in this overwhelming scenario, I turn back to our industry and offer my thoughts on what insights market data can offer to help weather the storm, that for many is already upon us. The first insight that I believe is helpful is that fresh produce is incredibly resilient to downturns in the stock market.

Through the last stock market crash, when the S&P 500 lost 53% of its value from its highpoint in August 2008 through the lowest point in March 2009. To draw a comparison with China retail sales, according to US Census data, the US's retail sector in 2009 saw a 14% fall in sales from its high point in 2008.

Avocados, which for many consumers are not considered a food staple, saw an increased volume from 2008 to 2009 by nearly 50m kilos, representing growth of 10%. Prices for the fruit only decreased by $2.21 per case, a 7% difference on the previous year. This 3% difference between the increase in volume and the decrease in price implies a modest growth in demand, even through these adverse economic times.


Avocados, Non-Organic, in the US Market 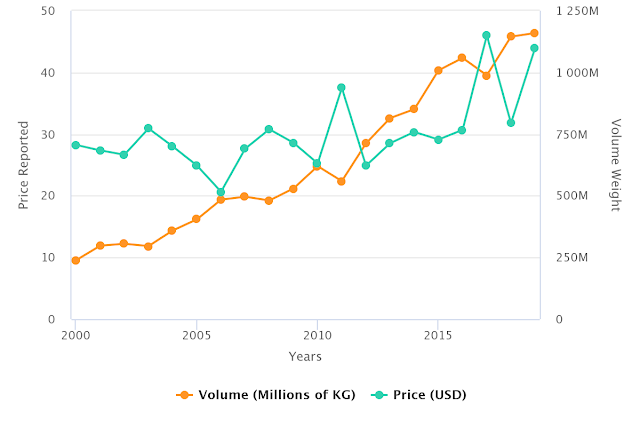 Blueberries saw an even more impressive year, with 2009 measuring the biggest rate of growth in the categories history bringing in 29m kilos more to the market - 28% more fruit than the previous year. During this time prices only fell by $0.61 or 7.3%.

The difference between the increase in volume and the decrease in price is 20%, representing a massive surge in demand. Admittedly, this same rate of growth should not be expected for blueberries today.

At the time, the category was going through a renaissance with Chile, adding some of the first major volumes of counter-seasonal fruit, filling a void in the market left by the northern hemisphere's production window. The juicing craze and blueberries’ label as a super fruit probably didn't hurt either. These factors aside, the important takeaway is that the underlying reasons for the category's growth continued relatively unaffected.


Blueberries, Non-Organic, in the US Market 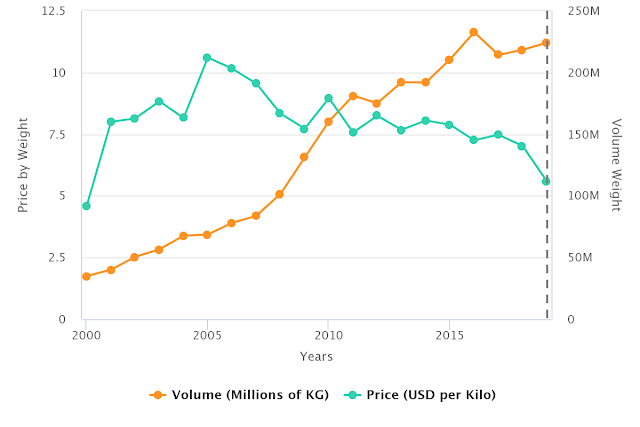 Some may argue that the last two commodities mentioned are an exception, the high-value fruit survived because wealthy people purchase them and they even have money in the hard times…

So I offer one last example, a much more established fruit that is available to all: table grapes. In the last 20 years, the category’s growth in volume has been limited, especially compared to avocados and blueberries. However, 2009 still saw growth, increasing by 54m kilos, or 4.3%. Prices in 2009 fell by $0.12 or 6.3%, representing a 2% decrease in demand, which could be accounted for by regular variance in the markets and a long cry from the near 53% loss in value that the S&P saw, or the 13% drop in retail sales.


Grapes, Non-Organic, in the US Market 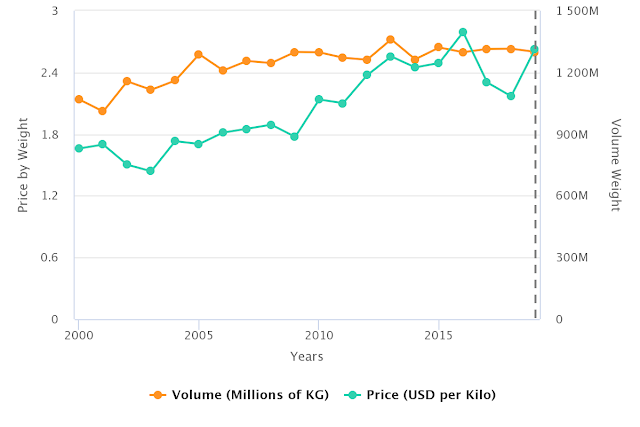 I am hopeful that this analysis calms some fears in a sea of trouble. This does not mean that our industry is saved, it just speaks to its resilience and ability to weather massive shocks to the economy that will send many other sectors of the industry under.

Unlike any previous economic downturn, however, this epidemic brings with it serious supply-side issues that can still greatly impact the fresh produce supply chain. On March 18 the US Government stopped processing new H2A visas for Mexican guest workers, effectively cutting the labor supply of skilled guest workers from Mexico by 60%.

In Europe closed borders are making it harder for food to travel between countries, restricting supply and affecting food security in the otherwise highly integrated trading block. Imbalances in trade because of the virus are causing containers to stack up in China,making them harder to come by in the west, with the spot price for freight jumping by 200% and still expected to rise.

Considering that the presidential approval rating is going up, the president's recent statements that social restrictions could last for three to six months might well be realistic. So as we settle in for the long haul, it is safe to assume that some supply disruptions will occur. Assuming stable demand as we saw with the previous stock market crash, this means that prices will rise.

These are the economics of supply and demand, allowing prices to act as a pressure relief valve for the available supply to satisfy consumer demand. This increase in price is the lifeline that the industry needs to stay afloat through these uncertain times. It will help them deal with unexpected costs, such as hiring local labor, higher than usual shipping costs and help ensure food security for the country now and in the future.