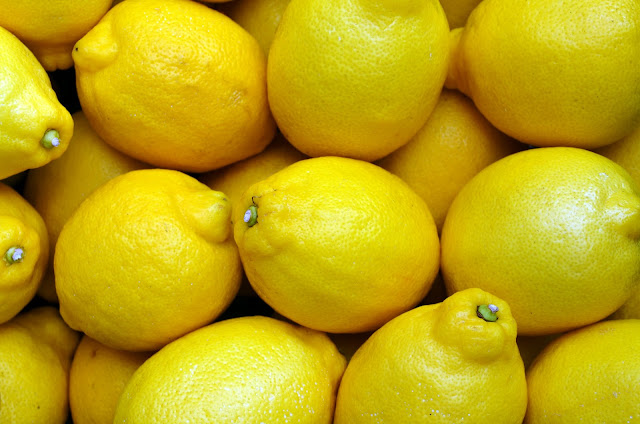 Argentina may be poised to ship more lemons into the U.S. come May.

Currently, domestic production on lemons comes largely from California on both the West and East Coasts. This is because there are some concerns with crops from other countries currently producing lemons.

“Turkey is basically done with lemons. They had a very bad crop of Interdonato variety and they didn’t compensate the volume they needed for both the domestic and the international markets,” says Luis Elortondo of Salix Fruits LLC, a US fruit importer/exporter specializing in citrus and based in Atlanta, Ga. “It’s a similar situation in Spain. Now they have a good crop of the late variety, Verna. But because of Turkey, there’s more demand from European customers. So they’ll finish their inventory sooner than normal.”


Historics lemon volumes from Spain in US market (Kilos) 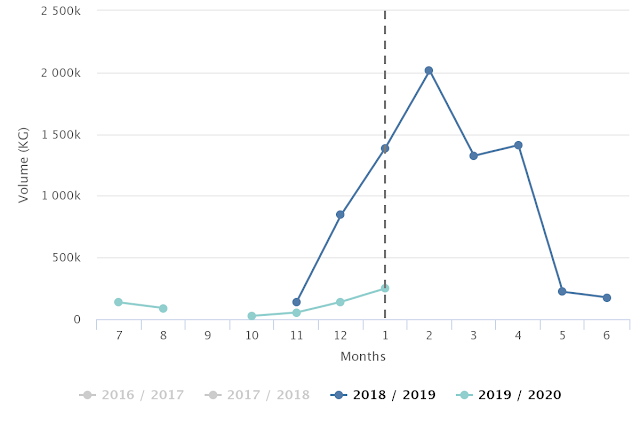 California will also likely finish up lemons earlier than expected given the last USDA report that predicted a 16 percent reduction of lemons out of the state.

Adding to these concerns are tariffs—more specifically, a 25 percent tariff imposed starting in 2019 on European products. “So because of crop issues and the tariff, both Turkey and Spain have shipped less to the U.S.,” says Elortondo. “On the East Coast, normally you’d have a combination of domestic and imported supplies. But because of what is happening with Turkey and Spain, there are just a few imported lemons and then California supplies.”

This puts Southern Hemisphere imports, which generally start in the U.S. in early May, in a good position. “It’s not a disaster. But in every producing country, there’s less production so we foresee the market being in a demanding position,” says Elortondo.

Now while demand currently isn’t as strong as it is in the summer, pricing is described as good. “They’re not as high as I would have thought because of the world supply situation. Pricing has been stable for the last two months or so and it’s very much the same as last year,” says Elortondo.


Historic Prices lemons in US market (USD per Kilo) 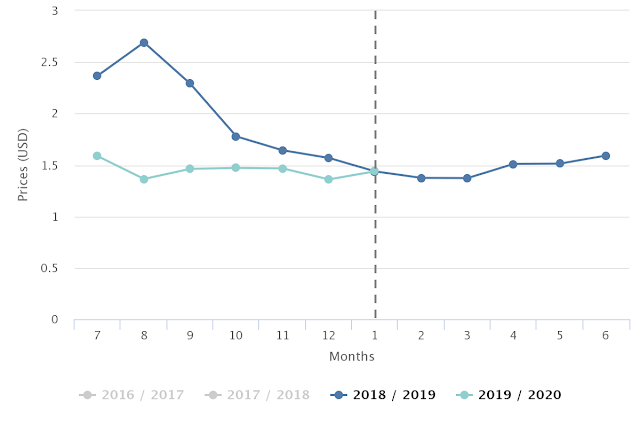 As for those Southern Hemisphere supplies, Argentina looks to have a good crop. “But it’s not as good as last year,” says Elortondo. “That’s good because last year they had a lot, particularly of the big sizes, so it wasn’t a very good market.”

Chile will also ship supplies, though there are issues with certain production areas in that country as well, the extent of which are currently undetermined.

What will be interesting to see is how much of Argentina’s crop will divert to fresh supplies. “They have the ability to send more to the fresh market if the prices are good. Generally approximately 70 percent goes to processing,” says Elortondo. “The problem can be quality though from the rain, though it’s raining less this season compared to last year. But Argentina has a good crop and if the prices are okay here, they will send as much as is necessary. They are in a good position because of the global supply situation.”