Blueberries in Charts: Opportunities and challenges for the U.S. in China 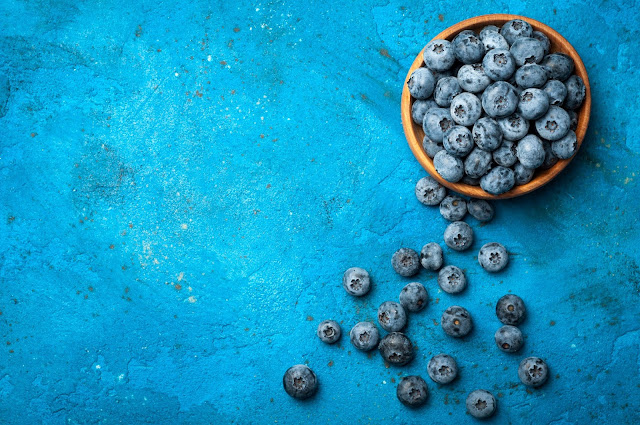 Over the last 15 Years, US Highbush Blueberry production has skyrocketed, going from a modest 42 M Kilos in 2005 to an impressive 124 M Kilos in 2014 after increasing every single year over the 9 year period. The last 5 years have since leveled off, defining a new epoch forUS Blueberries. 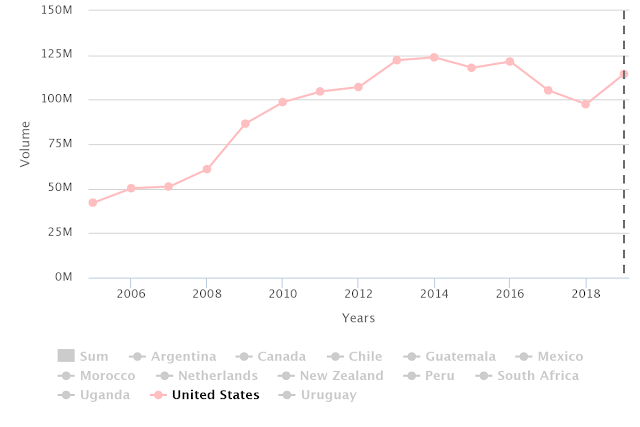 Source: USDA Market News via the IBO and Agronometrics. (View this chart with live updates here)

Through this tremendous increase in volume the laws of supply and demand have taken hold, discounting the product by around half its average yearly price over the 15 year period. 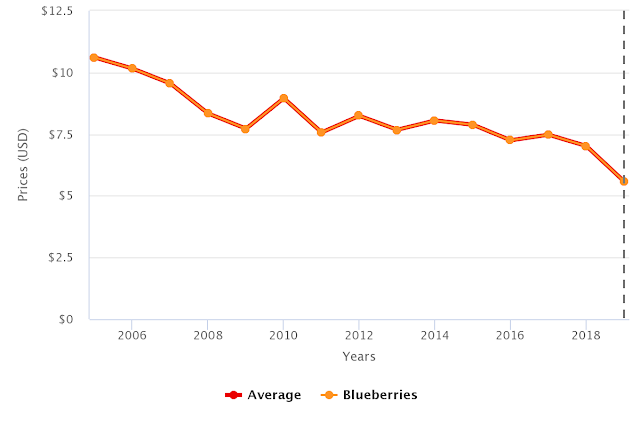 The chart above is the average of local and imported fruit, however when looking at just US prices, the scenario is actually more stable with origins such as New Jersey and North Carolina actually seeing an increase in their pricing over this time period. However, the origins closer to the beginning and end of the US season, such as Florida, Washington and Oregon have seen steadily decreasing prices as volumes from new producing regions in Peru and Mexico have filled in gaps at the beginning and the end of the US season to stabilized supply year round. 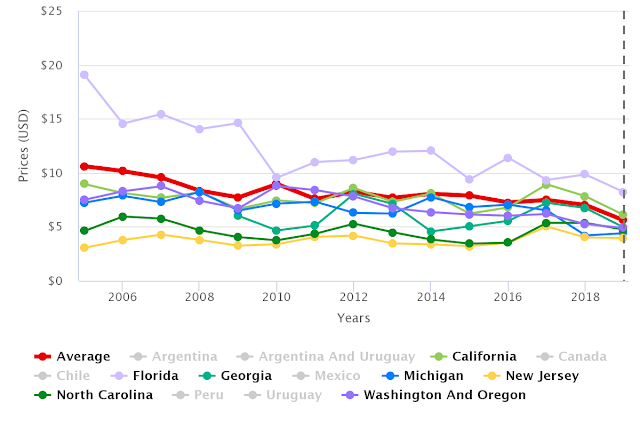 In this market scenario enters the US trade deal with China, agreed to on the 15th of Jan 2020. Among its 94 pages is one paragraph that may hold particular relevance to US blueberry producers:

“7. Within three months of the date of entry into force of this Agreement, USDA/APHIS and the GACC shall sign and implement a phytosanitary protocol to allow the importation of U.S. blueberries into China.”

So, as we dive into the market data available from both countries this article will explore what opportunities might be available for US Blueberries in China as producers set their sights on potential market opportunities in the East.

According to data made available by the UN COMTRADE, the Blueberry markets in China (including Hong Kong, but excluding shopments between the two) hold a lot of promise noting a market that grew 30% from 2016 to 2017, the last years for which we have reliable trade data. The volumes, however, were still small, led by Chile and Peru, they totaled only 26.7 M Kilos in 2017, or 25% of the volume produced by the US alone that same year.

This analyst believes that the opportunity for US producers are three fold, however none of them are as clear a market opportunity as one would hope:

1. There is a significant price premium for imported fruit in China compared to the prices in the US. Adjusting the Spot Market pricing presented in the charts above by weighing them against their corresponding volumes and reducing them to be on par with the traded value reported by UN COMTRADE for US fruit we come to a CIF equivalent price of USD $2.77 per Kilo for US Blueberries sold in the local Market in 2017. The equivalent price for imports in China that same year was USD $6.92. This is a considerable premium that I’m sure will get the attention of any US producer struggling under the pressure of the highly competitive US market. This price mostly corresponds to the volumes imported to the country from the southern hemisphere, where the price per kilo in the US itself was a much more competitive USD $6.04. During the US season there is admittedly little data we can work off of. It is possible that the high prices may yet be available for blues during the northern hemisphere's summer months, and this is definitely worth further investigating, but it will also depend on local fruit that may be available at the same time and ultimately the volumes that arrive on the market.

2. The second opportunity for US producers comes from the seasonality of their production. Noting that most producing countries that currently have access to China’s market are from the southern hemisphere, their production windows are counter seasonal to the US. With the exception of imports from North Korea and Canada (still affected by heavy duties on their products), this leaves most of the US season open in China without much foregn participation. Here again the picture is not as clear as one would like it to be. In the 2019 IBO State of the Industry Report, the contributors from China claimed extraordinary rates of growth in local plantings and production, which would share the same season with the US. There is a general consensus from many in the industry that the numbers publicised might have been healthily exaggerated, but there is equal consensus that local capacity is increasing, and with many well established western companies producing in China, the quality of the fruit produced should be up to scratch.

3. The third opportunity comes from the simple speed at which the market is growing. Although the volumes are small right now, and it may not take much volume to saturate prices, as the market matures, it could become a more attractive destination for US producers to sell their fruit.

The market aside, US producers will also face several challenges exporting their fruit, two come to mind right off the bat. First, the US is used to bringing in fruit from the outside, not the other way around, overcoming the transport and logistical hurdles while still making a profit is not a minor feat and will require investment. Naturally, West coast producers will have an advantage, so it remains to be seen if the East coast and Southern producers will be able to ship through the panama canal to take advantage of this new foregn market. The other major challenge is an even higher hurdle to get over and that will be offering a high enough quality fruit that it can survive the shipping times and still fetch an attractive price in lieu of increasing local competition. Quality has been a very contentious issue within the US for years. If producers want to export it will become all the more important.