Blueberries in Charts: A look at Chile's export forecast in turbulent waters 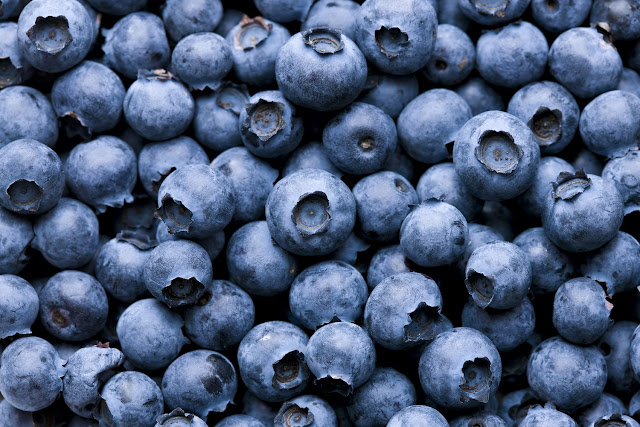 Chile’s recent announcement of a record blueberry crop forecast for the upcoming season came amid two weeks that saw the lowest prices in nine years in the U.S. market. With this backdrop, here I take a quantitative look at how the Chile's season might develop at the height of its campaign and what could be expected in terms of pricing. 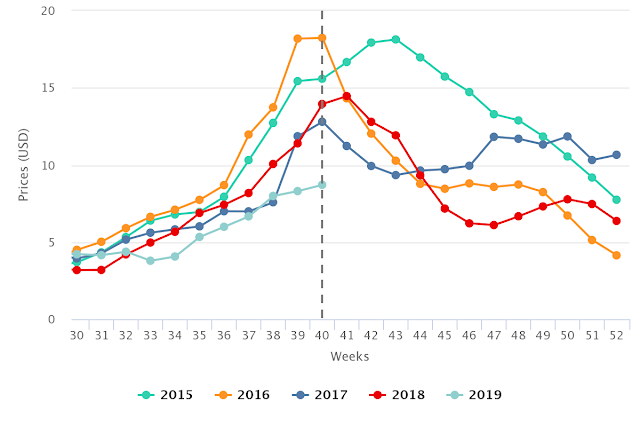 The first thing to keep in mind is that the blueberry landscape is dynamic and changes quickly - most recently it has been redefined by sudden the incorporation of Mexico and Peru. Neither of these origins had much of a presence in 2010, with Peru making the most dramatic increase after 2014. 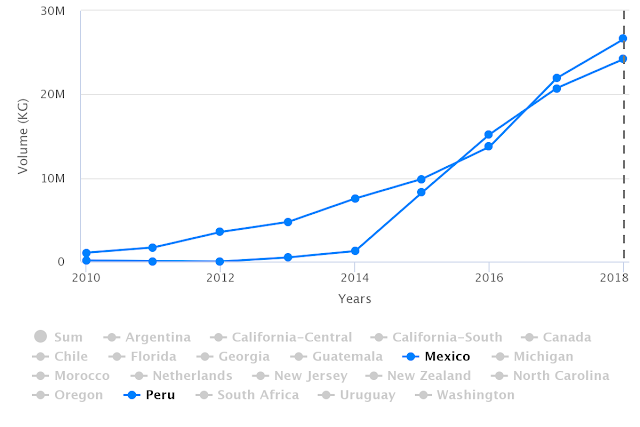 The new volume is a boon both for consumers and the industry, filling strategic gaps between the Chilean and U.S. seasons. It is also becoming the main driver of new retail sales and bringing the category ever closer to offering stable year-round production.

The chart below shows last year’s Chilean supplies next to the origins that participate at the same time in the U.S. market. 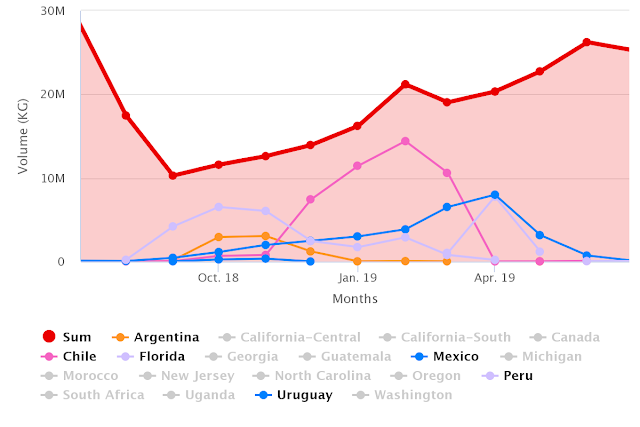 From the chart above and historic records, we know that the height of Chile’s season - and when they have the most market share - tends to be in January and February. There is a lot of complexity that can be unraveled with in the next couple of months, but with a look toward assessing the impact of Chile’s latest forecast, this article will concentrate on that period.

Thanks to the work that was done in the IBO’s State of the Industry Report 2019 (which interested readers can find through this link) we know that retail sales in January and February have been growing by an average of 9% year-on-year over the last five years.

So as a rule of thumb, if volumes also grow by the target growth rate of 9%, prices should remain similar to last year. Big swings up or down from the target growth rate will then have an opposite effect on price. This being the case, the big question is how much fruit will be on the market this year compared to last.

The Chilean Blueberry Committee is expecting a 4% growth in exports. Assuming that this will be distributed evenly through their different destinations, one might be quick to presume that prices should be higher than last year's. But because Chile no longer has sole domain over the winter months, this is where it is important to consider the impact of Peru and Mexico.

Peru has already stated that it is expecting between 28% and 41% increase in production (You can read more about Peru in a recent article that I wrote on the origin). So far, September has not disappointed - the USDA has reported Peru’s shipments have increased by 32% compared to last year.

As of the date of publication - at least to the best of my knowledge - Mexico has not published its estimate of this year's production. If we look at its historic data though it might be reasonable to expect a healthy amount of growth, especially considering the 25% increase they saw last year.

From what we can see of its season so far, Mexico isn’t disappointing either - September is already coming in 84% higher than last year. I very much doubt that Mexican growth will remain that high, but with no other data to work off, I feel like matching last year's growth rate is a reasonable place to start. 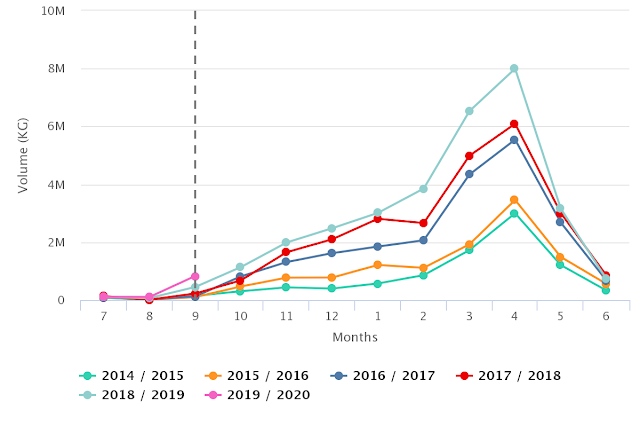 All these high growth numbers may sound scary, but it is important to keep in mind that at the height of Chile’s season, both Mexico and Peru are minority suppliers. This means that the big increases in volume won’t have as much of an effect on the overall volumes that ultimately will be made available to consumers.

If realized, the three countries’ growth rates this season - Chile 4%, Peru 28% and Mexico 25% - would bring the total growth during January and February to 10% and 11% respectively. With this information in hand, I would expect average prices during the height of Chile’s season prices should a bit lower than last year’s.

As we can see from the current prices, however, the beginning of the season looks to be much more complicated. With volumes for the last four weeks (37-40) 50% higher than last year, it is no wonder prices have tumbled. We’ll have to see how exporters from Peru, Argentina, and Uruguay work with this market scenario in the weeks to come.