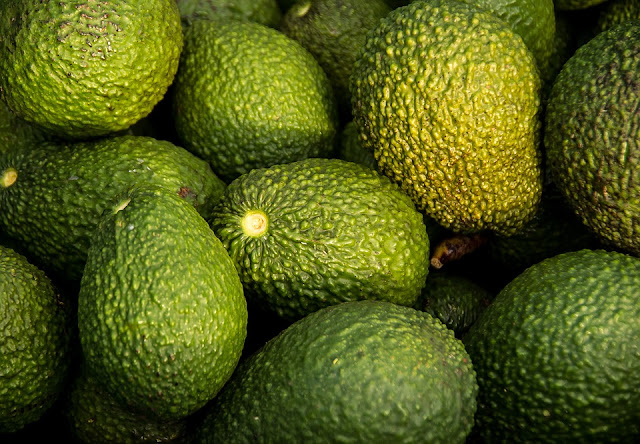 Agronometrics has often spoken about what is to come and how the market could be affected. We hold a strong belief in being able to look at objective data can help navigate complicated scenarios. The recent spike in prices that avocados have seen is an example of one of these scenarios, catching many by surprise at a time of the year where we had never seen movements like this before. This can be seen in the chart below where the 2019 line has towered above all other prices since Sept. 2017 and every price recorded for June in the last five years. 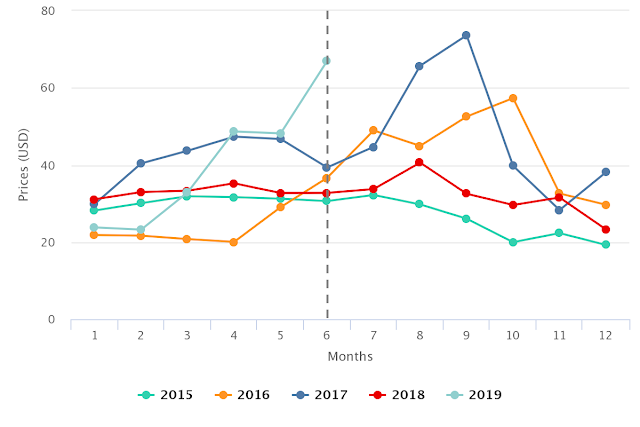 Comparing the volumes of this year to the last can offer some insight as to how these prices have come about. Considering the prices were almost flat last year, the volume data serves as a great benchmark to understand where customers expectations lie.

In this year’s data, an important oversupply can be found at the beginning of the year contrasted with an important under supply right around where the prices spiked. The argument here is that the resulting shift in volumes, compared to last year, have caused an increase in prices over the last six months. 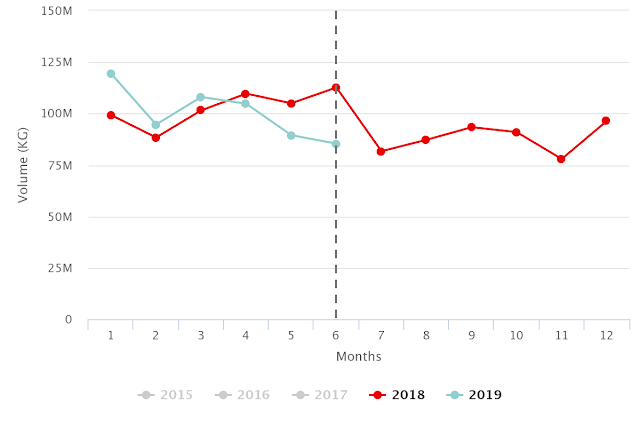 This under supply in the market is not being caused by one specific origin, but shortfalls from both California and Mexico – the two largest suppliers to U.S. consumers. First to cause a stir was California, whose season began about six weeks late creating the shortfall that sent prices from a near all-time low at the beginning of the year to around US$50 per box we saw in April.

California’s volume rose quickly after May, maintaining its normal trajectory, meaning that the origin has been consistently about 10M Kg short of their volume last year. maintaining prices high after the spike we saw in April. 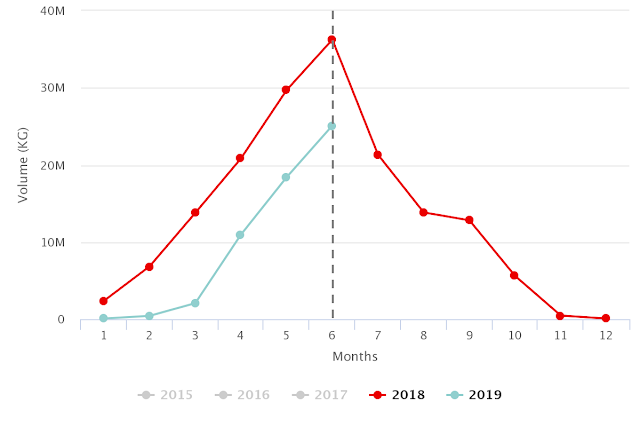 
The second spike which we can appreciate in June can be better attributed to the combined shortfall from California and Mexico, with a big emphasis on the latter’s producing regions. Looking at this year’s volumes compared to last, we can see the oversupply the origin sent at the beginning of the year, while the last two months have plummeted way below last years production, matching the volumes sent in 2016.

On an interesting historical note, June of 2016 coincides with the first strike of Mexican avocado pickers. To the best of my knowledge, this event holds no relationship to the movements we are currently seeing, but is an interesting observation none the less, that may give some insight as to the mechanics that made the market prices rally in 2016. 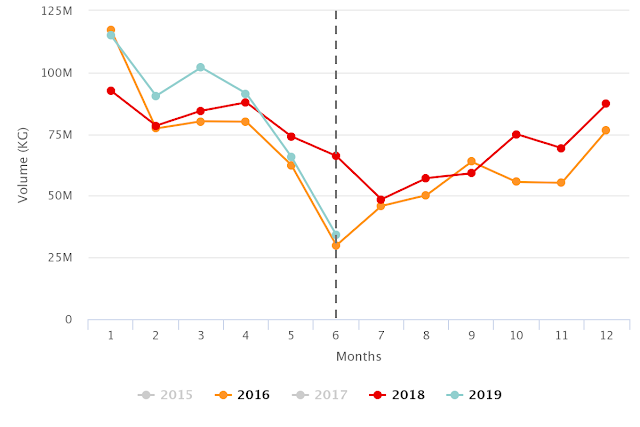 
As Mexico’s season gets its start, the question on everybody’s mind is where is the market headed? Will the rest of 2019 play out like 2016? If that were to be the case it might mean that prices could remain high through the rest of the fall, bringing in an unprecedented period of high prices for the fruit. There is a case to be made here, Mexico’s 2015-16 season increased a staggering 35% on the previous season, which stressed out the trees lowering production during the 2016-17 season and increasing the prices. 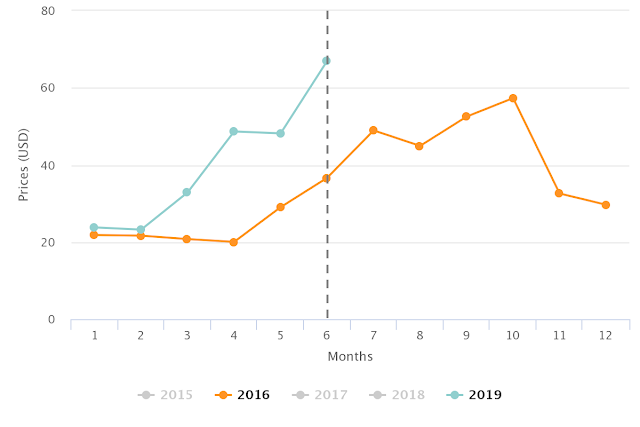 
If we take into account volume forecast of the Mexican Association of Avocado Producers and Packers (APEAM), however, this year could be very different to 2016 (Mexico forecasts record-breaking avocado exports to U.S. in 2019-20). The first hint is that the APEAM is forecasting a 5% increase on last season, a modest increase, but notable against the largest volume sent to date. Last years crop, although impressive, was only an increase on the previous year of 11%, with most of the growth concentrated in January, February and March, meaning that the volume increase forecasted by APEAM isn’t a huge stretch.

The distribution of this increase, or when the volumes will come to market, is crucial in our analysis. Looking to the nearer future, the weekly forecast that APEAM publishes through the Hass Avocado Board suggests a 20% increase on last years volume from week 28 through week 41, son July through October. Should these figures be accurate and adding to our analysis that Peru is sending more volume than ever and California is finally catching up to last years production, the readjustment in price could take us into October with pricing that could even fall below 2018. 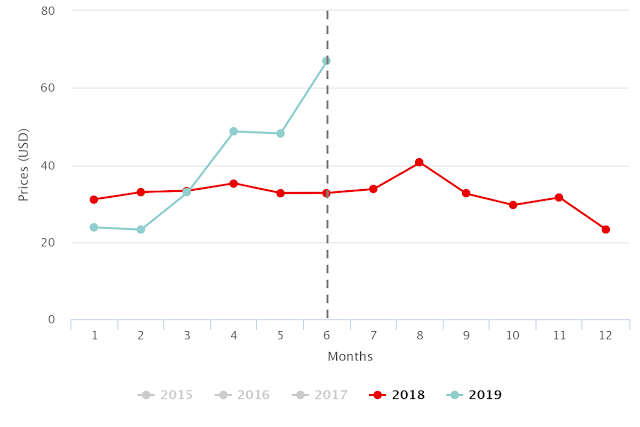